The trial of Dr. Josephson 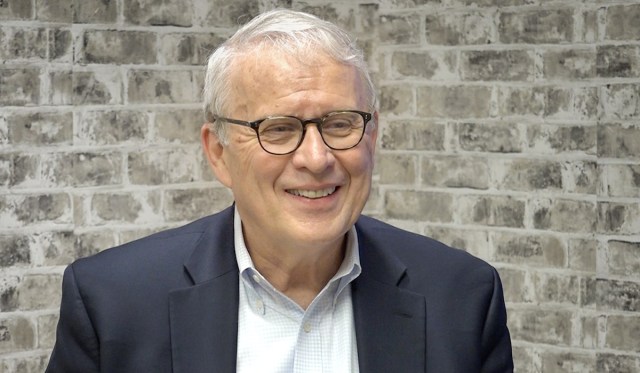 Allan Josephson is one of the most highly regarded child and adolescent psychiatrists in America. He headed up the child psychiatry division at the University of Louisville for the past fifteen years. He is the principal author of the practice parameter on assessment of the family from the American Academy of Child and Adolescent Psychiatry (AACAP). He would be considered one of the world’s leading experts on the role of family in treating kids with common mental health issues, including trauma. If one were to compile a list of academics  in our field who might be considered unassailable, I would have thought Dr. Josephson would have been on that list. I would have been wrong.

From the Louisville Courier Journal:

A University of Louisville medical professor sued U of L President Neeli Bendapudi and other school officials this week, claiming he was demoted and will be effectively fired over comments he made about how to treat transgender children during an off-campus panel.

In a new federal lawsuit, Dr. Allan Josephson, a university employee, claims he was retaliated against for exercising his First Amendment rights.

What exactly was Dr. Josephson accused of?

Josephson was chief of the U of L medical school’s Division of Child and Adolescent Psychiatry and Psychology for nearly 15 years but was demoted soon after speaking in late 2017 at an event for the Heritage Foundation, a conservative, nonprofit public policy think tank, according to his lawsuit.

During that event, he discussed his professional opinions on the treatment of children who experience gender dysphoria — views similar to those he had expressed as an expert witness in various legal cases.

Specifically, Josephson’s lawsuit says the professor generally made the following comments, among others, during his Heritage Foundation appearance:

Dr. Josephson was interviewed last week by National Review. I definitely encourage our followers to read the entire article. Here are a couple of highlights:

MK: The other thing you mentioned is that — to those outside this world — it can seem as though there are only a handful of doctors expressing your view, which makes them much easier to dismiss as crackpots or whatever.

AJ: I think it takes a certain academic perspective and knowledge of the field to say something. It can be lonely. For me, it was really three things.

First, it was a conviction that I had been wronged. It was just this moral sense. You don’t do this to someone who had worked this hard for university and in a few weeks get rid of them for expressing a view, which is really part of your job description. So there was a kind of a righteous indignation.

Second, I saw parents and children being hurt by this. These kids are, for the most part, very vulnerable people. You can see that when you spend time with them. Certainly, the teenagers have multiple problems. Most of the time, 60 or 70 percent of the time, depression, anxiety, substance abuse, they’re hurting people. And parents are confused because they’re basically getting one message from medical and mental-health professionals and that is “Affirm people.” And so I have encouraged people to explore before prescribing treatment, specifically to consider other developmental factors, family factors, that have gone into the insecurities that are associated with this.

And, and then finally, I spoke up because I’m at the end of my career. I have accomplished a lot professionally and had an established reputation. If someone like me can be demoted, harassed, and then effectively fired for expressing my views, think of what an intimidating effect this has on younger professionals, who are not yet established in their careers. And that should not be how academics proceeds or how science proceeds. We think together, we reason together, we talk together. My colleagues couldn’t do that. And I think we see that nationally as well.

Why are we talking about this?

Treatment of gender discordance is becoming a hot button topic in the autism and special needs communities. Some question the apparent overrepresentation of kids with autism among minors who are undergoing hormonal transitioning with hormones. In this news report out of the U.K. from last year, 35% of all child and adolescent patients served by the only gender clinic offering puberty-blocking drugs to youth were identified with autism spectrum disorders. I’m planning to explore this issue in a future post.

I have serious concerns regarding the objectivity of the evaluations and clinical recommendations given to families of kids who present to gender clinics. One interesting revelation from a high profile court case involving custody of a teen with gender discordance was the “concern” expressed by the judge that the Transgender Program at the Cincinnati Children’s Hospital deemed “100% of the patients…who present for care” to be “appropriate candidates for continued gender treatment.” The program had 965 active patients at the time of this case. In another study from the U.K., the number of referrals to the nation’s gender identity development service increased by approximately 1,000% between April 2011 and April 2017. 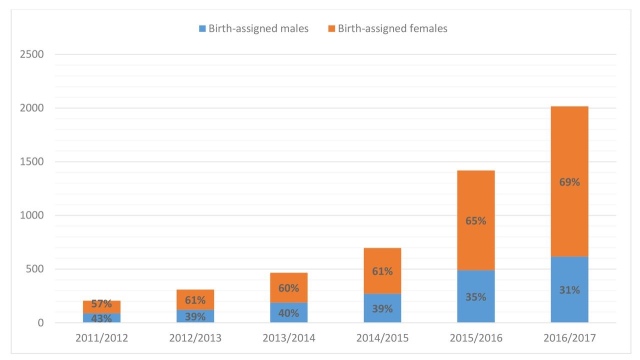 I’m very concerned about the ability of adolescent patients to provide truly informed consent to treatments associated with a substantial risk of sterility.

My biggest concern is whether sufficient evidence exists to demonstrate that the treatments offered to kids with gender discordance (puberty blockers, gender-affirming hormones) are safe and effective in reducing the levels of comorbid mental illness and suicidal thinking/behavior common in this population. For an excellent summary of the research, check out this article in the British Medical Journal’s Evidence-Based Medicine blog, most recently updated on April 13, 2019. Here are their conclusions:

There are significant problems with how the evidence for Gender-affirming cross-sex hormone has been collected and analysed that prevents definitive conclusions to be drawn. Similar to puberty blockers, the evidence is limited by small sample sizes; retrospective methods, and loss of considerable numbers of patients in the follow-up period. The majority of studies also lack a control group (only two studies used controls). Interventions have heterogeneous treatment regimes complicating comparisons between studies. Also, adherence to the interventions is either not reported or inconsistent. Subjective outcomes, which are highly prevalent in the studies, are also prone to bias due to lack of blinding.

An Archive of Diseases in Childhood letter referred to GnRHa treatment as a momentous step in the dark. It set out three main concerns: 1) young people are left in a state of ‘developmental limbo’ without secondary sexual characteristics that might consolidate gender identity; 2) use is likely to threaten the maturation of the adolescent mind, and 3) puberty blockers are being used in the context of profound scientific ignorance.

The development of these interventions should, therefore, occur in the context of research, and treatments for under 18 gender dysphoric children and adolescents remain largely experimental. There are a large number of unanswered questions that include the age at start, reversibility; adverse events, long term effects on mental health, quality of life, bone mineral density, osteoporosis in later life and cognition. We wonder whether off label use is appropriate and justified for drugs such as spironolactone which can cause substantial harms and even death. We are also ignorant of the long-term safety profiles of the different GAH regimens. The current evidence base does not support informed decision making and safe practice in children.

The University of Louisville just fired a highly regarded, full professor of child and adolescent psychiatry for questioning the use of hormonal treatments for which there is little evidence of effectiveness and lots of unanswered questions regarding short and long-term safety in a youth population at very high risk of mental illness and suicidal thoughts and behavior. What message does this send to any clinicians who might question the wisdom of “gender-affirming treatment?”

From what I’ve been able to gather from a variety of online sources, Dr. Josephson’s arguments are based upon what had been accepted wisdom in the care of kids with gender discordance until about five years ago and aren’t based upon any specific religious concerns or objections, although there are those who hold such objections.

There’s one more thing folks need to know about Dr. Josephson. He is (was) probably the most prominent Christian in academic child psychiatry. He’s the past-President of the psychiatry section of the Christian Medical Dental Association. He wrote a book used in many training programs to help young psychiatrists to understand the impacts of spirituality and worldview in clinical practice. I’ve previously met him at several dinners he organized for Christians attending the AACAP meeting. He’s a very impressive man and a credit to the practice of medicine.

Are you a pastor or ministry leader searching for resources to better understand how to support children, adults or families affected by mental illness in your church or in your community? Check out Key Ministry’s Mental Health Resources page, containing links to video, articles and topical blog series designed to help you minister with persons with common mental health conditions. Also available through the website are a free, downloadable mental health ministry planning tool designed to accompany Mental Health and the Church, along with links to recommended books, like-minded mental health ministry organizations, relevant research, sermons addressing mental illness, social media resources and a compilation of stories from families affected by mental illness.

Dr. Stephen Grcevich serves as President and Founder of Key Ministry, a non-profit organization providing free training, consultation, resources and support to help churches serve families of children with disabilities. Dr. Grcevich is a graduate of Northeastern Ohio Medical University (NEOMED), trained in General Psychiatry at the Cleveland Clinic Foundation and in Child and Adolescent Psychiatry at University Hospitals of Cleveland/Case Western Reserve University. He is a faculty member in Child and Adolescent Psychiatry at two medical schools, leads a group practice in suburban Cleveland (Family Center by the Falls), and continues to be involved in research evaluating the safety and effectiveness of medications prescribed to children for ADHD, anxiety and depression. He is a past recipient of the Exemplary Psychiatrist Award from the National Alliance on Mental Illness (NAMI). Dr. Grcevich was recently recognized by Sharecare as one of the top ten online influencers in children’s mental health. His blog for Key Ministry, www.church4everychild.org was ranked fourth among the top 100 children's ministry blogs in 2015 by Ministry to Children.
View all posts by Dr. G →
This entry was posted in Controversies, Mental Health and tagged academic medicine, adolescents, Child and Adolescent Psychiatry, children, Dr. Allan Josephson, gender discordance, transgender. Bookmark the permalink.

4 Responses to The trial of Dr. Josephson