How Many Kids (and Parents) are Taking Medication?

I came across an interesting online report from Medco Health Solutions (the pharmacy benefit managers) examining the patterns of medication use for emotional and behavioral disorders among children and adults in the U.S. I thought the data (derived from a pharmacy claims database covering two million Americans) might be eye-opening to our friends in church world in understanding the population they currently serve.

More than one in five adult residents of the U.S. currently take medication for a mental health disorder, including more than one in four women. More boys than girls are on medication, but the rate of increase in the use of medication is greater in girls than boys.

More than one in five women in the U.S. takes antidepressant medication (commonly used for anxiety as well as depression). Over the past ten years, there has been a 28% increase in the use of antidepressants among men, and a 29% increase among women. Among kids, rates of antidepressant use (primarily prescribed for anxiety) have been stable over the past five years and are lower than they were in the early part of the decade, prior to the “black box” warnings issued by the FDA about increased risk of suicidal thinking and behavior. 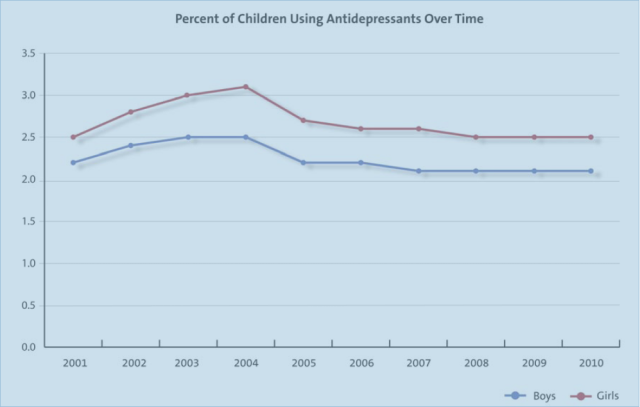 The rate of increase in anti-anxiety medication use was greatest among kids in the 10-19 age group…possibly related to the decrease in the use of antidepressants to treat anxiety because of the FDA warnings.

We’ve seen enormous increases in the use of second-generation antipsychotics. In children and teens, these medications are indicated for use in bipolar disorder, schizophrenia and severe aggression associated with autism spectrum disorders, but are primarily used to treat aggressive behavior. Around 1% of kids in the U.S. are prescribed antipsychotics, but the rate of use has doubled in the past ten years.

On Sunday, we’ll look at some of these numbers in more depth and discuss what they might mean for churches as they seek to serve those living in their surrounding communities.

Dr. Stephen Grcevich serves as President and Founder of Key Ministry, a non-profit organization providing free training, consultation, resources and support to help churches serve families of children with disabilities. Dr. Grcevich is a graduate of Northeastern Ohio Medical University (NEOMED), trained in General Psychiatry at the Cleveland Clinic Foundation and in Child and Adolescent Psychiatry at University Hospitals of Cleveland/Case Western Reserve University. He is a faculty member in Child and Adolescent Psychiatry at two medical schools, leads a group practice in suburban Cleveland (Family Center by the Falls), and continues to be involved in research evaluating the safety and effectiveness of medications prescribed to children for ADHD, anxiety and depression. He is a past recipient of the Exemplary Psychiatrist Award from the National Alliance on Mental Illness (NAMI). Dr. Grcevich was recently recognized by Sharecare as one of the top ten online influencers in children’s mental health. His blog for Key Ministry, www.church4everychild.org was ranked fourth among the top 100 children's ministry blogs in 2015 by Ministry to Children.
View all posts by Dr. G →
This entry was posted in ADHD, Anxiety Disorders and tagged church, Key Ministry, Medco Health Solutions, medication in adults, medication in kids, trends. Bookmark the permalink.