Back in the days when I was on the medical lecture circuit, I observed that physicians (and by extension, their patients) often worry about the wrong things.

Broadcast, traditional and online media have used a broad brush in painting a picture of indiscriminate use of dangerous medication in kids. In the case of kids being treated for ADHD with stimulants, a complete Medline search would identify somewhere in excess of 2,000 published studies over a 75 year period of time evaluating the safety and effectiveness of that class of medication. In our recent look at antidepressant medication, we saw more unanswered questions about the effectiveness of medicine used to treat depression in kids than exist around the safety of such medicine. Among the classes of medication commonly used for kids and teens with mental health disorders, I’m most concerned about the potential long-term safety risks associated with the use of antipsychotics.

Antipsychotics (the vast preponderance of which are second-generation antipsychotics…risperidone, quetiapine, aripiprazole, olanzapine) are clearly the most effective medications for kids with a valid diagnosis of bipolar disorder. Risperidone and aripiprazole have been shown to be effective in reducing the frequency and severity of aggressive behavior associated with autism spectrum disorders. The medications are also helpful for early-onset schizophrenia.

The best study (funded exclusively from non-commercial sources) examining the safety of antipsychotics among kids who hadn’t previously been treated was published by Dr. Christoph Correll in the Journal of the American Medical Association. This study examined metabolic issues in 338 kids treated for an average of 10.8 weeks with either olanzapine, quetiapine, risperidone or aripiprazole. Below is a graph looking at the mean

weight gain per child over the course of an eleven week study. To put this data in perspective, the mean increase in waist circumference ranged from 2.0 inches on risperidone to 3.4 inches on olanzapine. Kids gained from 8-15% (on average) of their baseline body weight over the course of the study. Weight gain levels off in some patients over time, but in my experience, other patients continue to gain weight with long term use.

In addition to weight gain, other metabolic concerns emerged in the course of Dr. Correll’s study. Antipsychotics were also associated with increases in fasting glucose levels, insulin levels and insulin resistance (a pre-diabetic state) in the case of olanzapine, increased total cholesterol, decreased HDL cholesterol and an increased triglyceride to HDL cholesterol ratio with quetiapine and significantly increased triglycerides with olanzapine, quetiapine and risperidone. 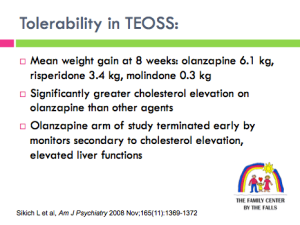 It’s important to acknowledge that the data presented here is derived from a short-term  study, and it’s difficult to interpolate long-term risks from a short term study. But data from another short-term study, the Treatment of Early-Onset Schizophrenia (TEOSS) study produced similar results. The NIMH-funded controlled study compared tolerability and efficacy of olanzapine, risperidone and molindone in patients ages 8-19. The study monitors suspended the olanzapine portion of the study because of changes in liver function and the severity of cholesterol elevation noted in kids randomized to that medication.

Personally, if a kid clearly has bipolar disorder or a psychotic illness or an autism spectrum disorder with aggressive behavior of a severity that they may no longer be able to live at home or a severe tic disorder I have no problem prescribing these medications when the benefits outweigh the risks. But the majority of kids coming into my office after having been prescribed antipsychotics don’t fall under any of those categories.

A 2006 study by Dr. Mark Olfson in the Archives of General Psychiatry reported that the most common indication for use of antipsychotics in kids was disruptive behavior, and that nearly 20% of psychiatric visits for patients age 20 and younger resulted in a

prescription for an antipsychotic. Since Dr. Olfson’s study, the absolute number of prescriptions written for antipsychotics in kids has increased every year, to 4.8 million per year for children in the U.S.

My frustration is that I see kids all the time who’ve been referred to our practice with a history of having been treated with antipsychotics coming in with parents who have little idea as to why their child is/was taking the medication prescribed, little understanding of the possible side effects associated with the medication and lacking the required monitoring for side effects while taking the medication. (from Correll, CU, J. Am. Acad. Child Adolesc. Psychiatry 2008; 47(1) 9-20.)

Next: When should a parent search for a new mental health professional for their child?

Dr. Stephen Grcevich serves as President and Founder of Key Ministry, a non-profit organization providing free training, consultation, resources and support to help churches serve families of children with disabilities. Dr. Grcevich is a graduate of Northeastern Ohio Medical University (NEOMED), trained in General Psychiatry at the Cleveland Clinic Foundation and in Child and Adolescent Psychiatry at University Hospitals of Cleveland/Case Western Reserve University. He is a faculty member in Child and Adolescent Psychiatry at two medical schools, leads a group practice in suburban Cleveland (Family Center by the Falls), and continues to be involved in research evaluating the safety and effectiveness of medications prescribed to children for ADHD, anxiety and depression. He is a past recipient of the Exemplary Psychiatrist Award from the National Alliance on Mental Illness (NAMI). Dr. Grcevich was recently recognized by Sharecare as one of the top ten online influencers in children’s mental health. His blog for Key Ministry, www.church4everychild.org was ranked fourth among the top 100 children's ministry blogs in 2015 by Ministry to Children.
View all posts by Dr. G →
This entry was posted in Controversies, Mental Health and tagged adolescents, antipsychotics, aripiprazole, children, controversies, Dr. Christoph Correll, Mental Health Month, olanzapine, quetiapine, risperidone, safety, Stephen Grcevich MD. Bookmark the permalink.

1 Response to Hot Topics: Is Antipsychotic Medication Safe for Kids?