What Challenges do Families of Kids With Bipolar Disorder Face?

This post is the third in a six-part series: Pediatric Bipolar Disorder: A Guide for Children’s and Youth Pastors and Volunteers

Families of children with bipolar disorder encounter burdens and challenges unlike those associated with any other disability.

Bipolar Disorder can be considered as one of a number of “hidden disabilities,” serious emotional, behavioral, developmental or neurologic conditions in which there are no outwardly apparent physical symptoms. One common thread that runs through many hidden disabilities (ADHD, autism, attachment disorders, traumatic brain injury, fetal alcohol effects) is difficulty with emotional self-regulation. During a severe mood episode, kids or teens with bipolar disorder have problems with emotional self-regulation that are unimaginable to those who have never been through the experience. From the website of the Child and Adolescent Bipolar Foundation:

Parents with concerns about their child’s extreme behaviors should consider the following steps:

Think for a moment about living in a home like that. Or being a younger, more vulnerable child in a family in that home. On top of everything else, parents and siblings may have no idea on a day to day basis of what to expect from their brother or sister with bipolar disorder. 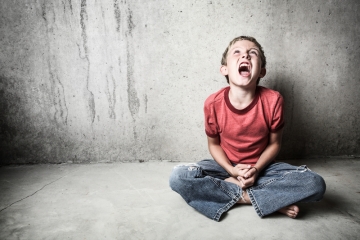 Parents of kids with bipolar disorder become tired of having to manage their child’s behavior—and explaining their behavior to others in new settings. If you’re shopping in Walmart and you see a child with Down Syndrome, a child with cerebral palsy or a child in a wheelchair having a meltdown, you’re not likely to give it a second thought. If the child looks and appears perfectly normal and the parent is flustered and overwhelmed, you might arrive at a different conclusion. While we’re on the subject, how do you think the people who attend your church would respond to a family in such a situation?

Social isolation is often the norm for families of kids with bipolar disorder. Assuming the parents are still married (a big assumption), they can’t just call up any teenage babysitter if they want to get out on Saturday night. Given our Walmart discussion, affected families don’t get out in public as much as their friends and neighbors. Siblings miss out on going to the movies, baseball games, concerts, and church. (More on missing church in Part Five.) Fatigue and economic strain are common.  Frequent visits to physician’s offices and pharmacies can result in enormous financial burdens. Aripiprazole (Abilify®), one of the most commonly prescribed medications for kids with bipolar disorder, may cost $1,000/month or more. Most kids with bipolar disorder also have ADHD, with medications for that condition priced at $250/month or more. There may not be money for any extras even if the family has the time or the energy.

Families also have to cope with the emotional toll of the relapses and recurrences that occur after the child has had a positive response to medication. In research conducted at the University of Cincinnati, Dr. Melissa DelBello was able to achieve remission of symptoms in 85% of kids treated for bipolar disorder, but 52% of those who responded to treatment experienced a relapse within the next year, with an average time to relapse of 17 weeks.

Here’s a video that was produced in an effort to obtain funding for a PBS documentary on the impact of bipolar disorder on families:

Just the kind of messy, broken families who are in need of extraordinary love.

Next: How might bipolar disorder affect church attendance and spiritual development?

Dr. Stephen Grcevich serves as President and Founder of Key Ministry, a non-profit organization providing free training, consultation, resources and support to help churches serve families of children with disabilities. Dr. Grcevich is a graduate of Northeastern Ohio Medical University (NEOMED), trained in General Psychiatry at the Cleveland Clinic Foundation and in Child and Adolescent Psychiatry at University Hospitals of Cleveland/Case Western Reserve University. He is a faculty member in Child and Adolescent Psychiatry at two medical schools, leads a group practice in suburban Cleveland (Family Center by the Falls), and continues to be involved in research evaluating the safety and effectiveness of medications prescribed to children for ADHD, anxiety and depression. He is a past recipient of the Exemplary Psychiatrist Award from the National Alliance on Mental Illness (NAMI). Dr. Grcevich was recently recognized by Sharecare as one of the top ten online influencers in children’s mental health. His blog for Key Ministry, www.church4everychild.org was ranked fourth among the top 100 children's ministry blogs in 2015 by Ministry to Children.
View all posts by Dr. G →
This entry was posted in Anxiety Disorders, Bipolar Disorder, Mental Health, Ministry Environments, Uncategorized and tagged Child and Adolescent Bipolar Foundation, children's ministry, Key Ministry, Melissa DelBello, mental health ministry, pediatric bipolar disorder, student ministry, youth ministry. Bookmark the permalink.

3 Responses to What Challenges do Families of Kids With Bipolar Disorder Face?