Adults with disabilities and church attendance…What does the data say? 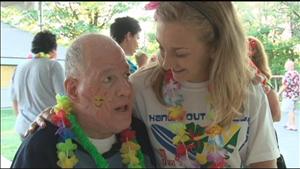 One of the challenges faced by the disability ministry movement is the absence of good data examining the impact of specific conditions on church attendance and spiritual growth. Speakers all too often quote a statistic during talks without a specific reference.

This past Friday, our good friend and colleague Laura Lee Wright of Bethesda Lutheran Homes posted a request in the Special Needs and Disabilities Ministry Facebook group for a statistic on how many people with disabilities are unchurched. The one piece of data I’ve traditionally shared was a 1994 Harris survey reporting that 49% of adults with disabilities attended religious services at least once a month, compared to 59% in a control group of persons without disabilities. Statistics on the impact of disability in children on church attendance are practically nonexistent. Thanks to the wonders of Google, I was able to find more recent statistics in adults.

The Kessler Foundation and the National Organization on Disability commissioned Harris Interactive to conduct the 2010 Survey of Americans with Disabilities. This has been an ongoing research project for 20+ years tracking a number of quality of life indicators and employment data for adults with disabilities, comparing those indicators to adults in the general population without disabilities. One of the quality of life indicators used in the study is frequency of attendance at religious services…the source of the statistic I mentioned above.

Here’s a description of the survey methodology:

The sample of people with disabilities was limited to non-institutionalized individuals with disabilities, with a person qualifying for this portion of sample if he or she currently: Has a health problem or disability that prevents him or her from participating fully in work, school, housework, or other activities; or reports having a physical disability of any kind; a seeing, hearing, or speech impairment; an emotional or mental disability; or a learning disability; or considers himself or herself a person with a disability or says that other people would consider him or her to be a person with a disability. 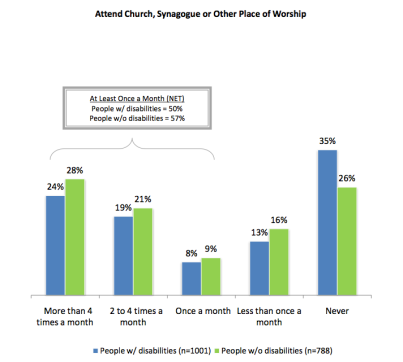 The survey also examined the relationship between the severity of disability and frequency of attendance at religious services. Participants self-identified their disability as “slight”, “moderate”, “somewhat severe” or “very severe”. Those with self-described “slight” and “moderate” disabilities were significantly more likely to attend church compared to participants with more severe disabilities. Quoting from the study authors…

“This difference is the same as it was in 2004, suggesting that not much has changed in the way of removing architectural, communications, and attitudinal barriers that prevent people with disabilities—especially people with severe disabilities—from regular attendance”. (Table 8B)

We do know that the Body of Christ is incomplete without the gifts, talents and presence of everyone. We also know that God’s at work through a multitude of churches and ministries sharing His love with adults with disabilities. We also know that as recently as 2010, an extremely limited data set suggests the burgeoning disability ministry movement hasn’t yet made a statistically significant impact upon church attendance among adults with disabilities.

Here’s a link to the full survey, including methodology.

Dr. Stephen Grcevich serves as President and Founder of Key Ministry, a non-profit organization providing free training, consultation, resources and support to help churches serve families of children with disabilities. Dr. Grcevich is a graduate of Northeastern Ohio Medical University (NEOMED), trained in General Psychiatry at the Cleveland Clinic Foundation and in Child and Adolescent Psychiatry at University Hospitals of Cleveland/Case Western Reserve University. He is a faculty member in Child and Adolescent Psychiatry at two medical schools, leads a group practice in suburban Cleveland (Family Center by the Falls), and continues to be involved in research evaluating the safety and effectiveness of medications prescribed to children for ADHD, anxiety and depression. He is a past recipient of the Exemplary Psychiatrist Award from the National Alliance on Mental Illness (NAMI). Dr. Grcevich was recently recognized by Sharecare as one of the top ten online influencers in children’s mental health. His blog for Key Ministry, www.church4everychild.org was ranked fourth among the top 100 children's ministry blogs in 2015 by Ministry to Children.
View all posts by Dr. G →
This entry was posted in Controversies, Inclusion and tagged 2010 Survey of Americans With Disabilities, adults, church attendance, Disability, Disability Ministry, Harris Interactive, Inclusion. Bookmark the permalink.

4 Responses to Adults with disabilities and church attendance…What does the data say?