Editor’s note: Today we present the second in a three post miniseries from Shannon on the words we use in the church when talking about adoption. 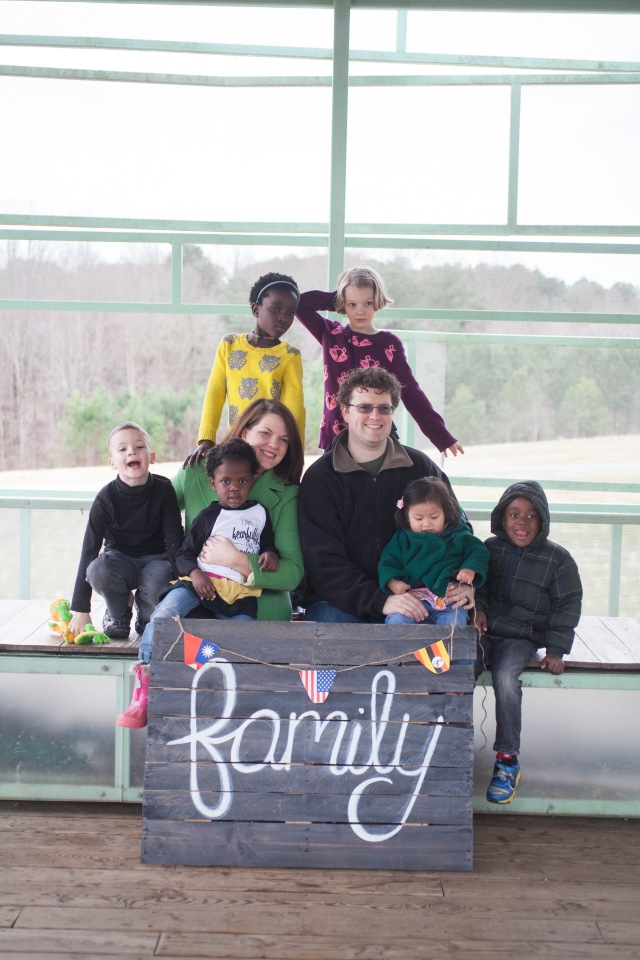 I’m a child of God. When he drew me in so I might know him, I joined God’s family. The Bible calls this adoption. In fact, the word “adoption” in scripture only refers to this sort of vertical adoption, from God to us.

Six darlings are children of mine. For four, we found out their need for a family and pursued the legal process for them to be added to ours. The earthly term for this is also adoption. But in all the adoption stories in the Bible – Moses, Esther, and Mephibosheth to name a few – the word “adoption” isn’t used. Instead the original Hebrew and Greek words give a sense of being brought in or cared for in these horizontal adoptions, those of parents to child adoptees.

In English, both scenarios are called adoption, but they aren’t the same.

I can’t deny that our horizontal adoptions sometimes felt like parables of God’s vertical adoption of me. I remember being struck by his pursuit of me to bring me into his family as we did the same for the children we adopted. I remember considering the great cost he gave for us to be his children as my husband and I sacrificed in a much smaller way for our children to become our own. At the point in our horizontal adoptions when our children took our last name legally, I remembered the time when I received the name of Christian. When one of my children who was slower to respond affectionately to us responded “I love you too” and said spontaneously “I love you” for the first time 11 months and 18 months respectively after we took custody, I couldn’t help but consider how God loved me for much longer before I ever reciprocated that attachment. After our adoptions here on earth, verses about God viewing us as co-heirs with Christ took new meaning. I knew how I loved my children by both adoption and conception equally, and the realization brought me to finally believe that God the Father could really view me in the same way he does his Son.

But parables are merely an illustration and not the real thing. Speaking of parables, the ones in scripture about our spiritual adoption are more of a reunion than anything else. The lost sheep is sought and comes back to the flock, the prodigal son leaves and is welcomed back when he returns, and the coin which was missing is searched for until the owner finds it again. Vertical adoption is about us, God’s people, returning to the One who created us in the first place. Those are the sorts of parables Jesus told about spiritual adoption. Earthly adoption, while holding some similarities, is a poor parable by comparison to the ones Christ offered in the first place. One way the comparison is a poor one is that in Jesus’s parables about spiritual adoption, he is talking about redeeming the adopted from the hell they were headed for otherwise, whereas prior to earthly adoption, the realities of adoptees may or may not have been wholly unpleasant.

But “we’re all adopted” in the church, you might argue. Yes and no, I’d reply. All of us who know Christ were adopted in the vertical or spiritual sense of the word. But only some people’s circumstances require an earthly adoption. To make the issue even messier, many of those who have experienced earthly adoption will later experience spiritual adoption (or, in the case of older adoptees, may have experienced that first), but we don’t usually say they are twice adopted or doubly adopted. When kids in adoptive or foster placements hear comments like “we’re all adopted,” confusion can result as they may not be able to grasp the metaphor you’re trying to convey.

As I talk with adult adoptees – who are far too often hurtfully dismissed as “angry” if they dare to challenge the church’s adoption narratives with their own lived experiences – I am learning that the lessons I’ve learned about spiritual adoption through our earthly adoptions are precious but not perfect. I’m learning to choose my words and comparisons with more wisdom, as I listen to other believers I highly respect when ones like Tara Bradford write, “Shouldn’t we be careful in how we relate spiritual adoption to physical adoption through the use of our Adoption Christianese statements?” (I highly recommend clicking the link to read her entire post on this topic.)

I was adopted by God. Four of our children were adopted by me and my husband. While those English words are the same, their meanings are not. Just as you know I don’t mean the same emotion when I say “I love my husband” and “I love coffee,” let’s be mindful that vertical and horizontal adoption aren’t identical either. When we choose our words about adoption, let’s do so carefully so that we don’t add to the trauma and hurt that might already be present in our churches.

This post is the second in a three post series on the words we use about adoption as Christians. While my words might step on some readers’ toes, please know that I have been guilty – and sometimes continue to be at times – of every mistake to which I draw our attention. This isn’t about political correctness, self-righteousness, or simple rhetoric; it’s about love. I think we can all agree that words can be received as unloving, whether or not the speaker intended for them to be. Could we all be humble enough to set aside the argument “but I didn’t intend to…” and instead listen to how those words are being received on the other end? As I focus on the impact of our words, I’m hoping my words can be received with the same love with which I’m offering them. And as always, feel free to comment or engage with us if you don’t agree, because that’s one way iron can sharpen iron, to borrow the wording of Proverbs 27:17.

Dr. Stephen Grcevich serves as President and Founder of Key Ministry, a non-profit organization providing free training, consultation, resources and support to help churches serve families of children with disabilities. Dr. Grcevich is a graduate of Northeastern Ohio Medical University (NEOMED), trained in General Psychiatry at the Cleveland Clinic Foundation and in Child and Adolescent Psychiatry at University Hospitals of Cleveland/Case Western Reserve University. He is a faculty member in Child and Adolescent Psychiatry at two medical schools, leads a group practice in suburban Cleveland (Family Center by the Falls), and continues to be involved in research evaluating the safety and effectiveness of medications prescribed to children for ADHD, anxiety and depression. He is a past recipient of the Exemplary Psychiatrist Award from the National Alliance on Mental Illness (NAMI). Dr. Grcevich was recently recognized by Sharecare as one of the top ten online influencers in children’s mental health. His blog for Key Ministry, www.church4everychild.org was ranked fourth among the top 100 children's ministry blogs in 2015 by Ministry to Children.
View all posts by Dr. G →
This entry was posted in Adoption, Advocacy, Foster Care, Key Ministry and tagged Adoption, church, horizontal adoption, Inclusion, Key Ministry, Shannon Dingle, vertical adoption. Bookmark the permalink.