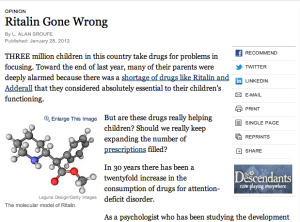 I’m postponing the scheduled conclusion of our series on diagnosis until Tuesday to address the commentary from L. Alan Sroufe in today’s New York Times, Ritalin Gone Wrong.

Because the folks in the media who produce the vast majority of news content consumed in the U.S. will have read this piece over breakfast this morning, the claims raised in this article will be widely circulated. Some of Dr. Sroufe’s statements I agree with. But many of his assertions are misleading or inaccurate. Here’s what he got right…

We don’t have long-term controlled studies demonstrating continued effectiveness of stimulant medication for ADHD over many years. This is true. But the absence of long-term studies demonstrating that short-term benefits of ADHD medication are maintained doesn’t mean that long-term benefits don’t exist for many patients. The methodology involved in conducting such studies is extremely challenging and extremely expensive. You can’t keep kids in a randomized study for years on end because families want to be able to choose alternative treatments if their child isn’t making as much progress as is desired. Parents divorce, families move, kids are lost to follow-up.

Problems with attention, self-regulation and behavior can be caused by factors present prior to, during and after birth. In my mind, there’s no doubt that trauma, chaotic stress and early experience contribute to the development of symptoms that can be characterized as ADHD. I worked for a number of years in a large, inner-city children’s mental health clinic. I can personally attest that kids exposed to trauma in homes I referred to as “psychosocial train wrecks” experienced a quantitatively and qualitatively different response to ADHD medication than kids from my suburban private practice.

There will never be a single solution for all kids with learning or behavioral problems. More complex solutions than medication are necessary for most kids we see. Kids need loving parents who provide consistent discipline and safe, supportive living environments. They need schools flexible enough to address their unique learning styles and needs. They need positive role models and relationships outside their extended families. Unfortunately, doctors can’t fix all of that and are left to address what we can.

“The drugs can also have serious side effects, including stunting growth.” Here’s what the American Academy of Pediatrics had to say about this topic in their Clinical Practice Guidelines for ADHD (updated this past October):

The results of the Multimodal Therapy of ADHD (MTA) study revealed a more persistent effect of stimulants on decreasing growth velocity than have most previous studies, particularly when children were on higher and more consistently administered doses. The effects diminished by the third year of treatment, but no compensatory rebound effects were found. However, diminished growth was in the range of 1 to 2 cm. (0.4-0.8 inches)

Unless your kid is entering the NBA draft, I’m hard-pressed to see how a difference in their ultimate stature of a half-inch can be construed as a “serious” side effect. We don’t have to do blood tests for kids on ADHD medication, nor do we have to check EKG tests. The first randomized study of stimulant medication for what we now know refer to as ADHD was published 75 years ago. Given that 9.5% of the school-age population in the U.S. has received at least one prescription for ADHD medication (predominantly stimulants) and millions have taken medication for years, it’s rather hard to believe there are serious side effects that we wouldn’t yet be aware of.

“The effects of stimulants on children with attention problems fade after prolonged use.” There’s simply no evidence to support Dr. Sroufe’s claim.

The study that Dr. Sroufe references throughout his opinion piece is the MTA study. Here’s a summary of the study design and results of the MTA from the National Institute of Mental Health (funders of the study) and a link to the paper examining eight year follow-up data of kids enrolled in the study.

His conclusions are based upon a long-term study in which relatively few kids remained on medication throughout the study. From the MTA:

The challenge we see as clinicians over time is that kids often stop taking their medication during the tween or early teen years because of the continued effects of the drugs. From the MTA study:

In a five-year follow-up study of kids prescribed stimulants at Toronto’s Hospital for Sick Children, only 36% of kids continued to take medication by the end of the study period. The conclusion of the authors:

Psychostimulants improve ADHD symptoms for up to 5 years, but adverse effects persist.

They apparently develop a tolerance to the drug, and thus its efficacy “disappears.” There is no evidence that large numbers of kids develop tolerance to the effects of stimulants. I’ve seen a few older kids who had been misusing stimulants by dosing their medication in such a manner as to achieve around the clock effects develop tolerance to the beneficial effects. It’s also possible that some individuals on long-acting stimulants may develop some transient reduction in benefit from accumulating the drug in their system. Most patients who notice such an effect also notice the return of a robust response to medication if they don’t take their medication for a day or two.

Dose increases over time in kids who continued on medication certainly weren’t striking in the MTA study, considering that the average age of participants when the study began was 8.5, and 16.8 at the end:

Average total daily dose of those taking stimulants at both assessments was 43.36 mg (SD 24.33) at 8 years and 30.68 mg (SD 13.94) at 14 months. Thus, stimulant medication at 8 years more often reflected continued treatment, with increased dosage, rather than newly initiated medication.

Kids occasionally need increases in medication dose as they get older, but in my experience, the changes occur because of increases in demands for academic productivity in middle school and high school and not from any loss of effectiveness of medication.

“But in 2009, findings were published from a well-controlled study that had been going on for more than a decade, and the results were very clear.” The results of the eight year follow up from the MTA study were anything but clear. Here’s what we know, in the words of the study authors:

“After 14 months, the MTA became an uncontrolled naturalistic follow-up study, and inferences about potential advantages that might have occurred with continued long-term study-provided treatment are speculation.”

You can’t compare the results of the MTA to short-term, randomized, controlled studies of stimulants because the MTA wasn’t a randomized study with kids receiving comparable treatments under comparable conditions. In fact, by definition, the kids in the MTA study all received “routine community care,” the least effective treatment in the randomized phase of the study.

“These findings provide evidence that the differential effects of the ADHD treatments, evident when the interventions were delivered, attenuated when the intensity of treatment was relaxed.”

The study demonstrates that kids didn’t do as well when the frequency and intensity of their treatment decreased, regardless of whether the treatment was medication alone, intensive behavioral treatment alone, or a combination of both.

“Our results suggest that the initial clinical presentation in childhood, including severity of ADHD symptoms, conduct problems, intellect, and social advantage, and strength of ADHD symptom response to any treatment, are better predictors of later adolescent functioning than the type of treatment received in childhood for 14 months.”

The smarter you are, the more stable your family is, and the less severe your symptoms of ADHD are when initially diagnosed predict how well you might do in the long run as opposed to your medication status.

“Taken together, these 8-year findings point to a crucial need for development of treatments that are efficacious, accessible, and lasting for high school—aged youths with ADHD and their parents.”

The problem with many of the short-term stimulant studies is that they don’t take into account other concomitant conditions frequently experienced by kids with ADHD. Stimulants may exacerbate obsessive thinking, compulsive behavior and social anxiety. Many kids develop patterns of interaction around their verbal impulsivity and don’t like the feeling of being less impulsive. I hear comments daily from kids with ADHD who stopped taking medication because “I didn’t feel like myself” or “My friends said I was too serious.” Many kids stop taking medication because of negative effects on appetite and sleep.

“Children with combined-type ADHD, despite having received 14 months of intensive state-of-the-art behavior therapy or medication management, are functioning less well than their non-ADHD age-mates across most indices of functioning.”

Kids with ADHD continue to struggle relative to their peers without ADHD over time. They need lots of ongoing help and support. They need access to cognitive therapy and behavioral therapy from competent and effective clinicians. They need schools with the flexibility to provide accommodations to help all kids maximize their potential. They need stable environments and supportive families. Kids with ADHD don’t need stories in the news media unnecessarily fueling the fears of parents about the safety or effectiveness of medication they give to their kids struggling with a significant disability. You can’t use a study that wasn’t designed to demonstrate the long-term effectiveness of stimulant medication to claim that such medication is ineffective.

Click here for the Key Ministry resource page on ADHD and Spiritual Development.

Disclosures: I’ve done no promotional speaking for pharmaceutical companies in the last five years. 100% of honoraria for industry consulting in 2008 and 2009 were contributed to Key Ministry (no industry consulting since 2010). All research funding since 2007 has been from the National Institute of Mental Health through our practice’s participation in the CAPTN (Child and Adolescent Psychiatry Trials Network) Network, in partnership with Duke University.

Our Key Ministry team is very much in need of your support if we are to continue to provide free training, consultation and resources to churches. Please consider either an online donation or a sponsorship from the Key Catalog. You can sponsor anything from an on-site consultation at a local church, the addition of a new site for church-based respite care, to a “JAM Session” to help multiple churches launch special needs ministries in your metropolitan area. Click the icon on the right to explore the Key Catalog!

Dr. Stephen Grcevich serves as President and Founder of Key Ministry, a non-profit organization providing free training, consultation, resources and support to help churches serve families of children with disabilities. Dr. Grcevich is a graduate of Northeastern Ohio Medical University (NEOMED), trained in General Psychiatry at the Cleveland Clinic Foundation and in Child and Adolescent Psychiatry at University Hospitals of Cleveland/Case Western Reserve University. He is a faculty member in Child and Adolescent Psychiatry at two medical schools, leads a group practice in suburban Cleveland (Family Center by the Falls), and continues to be involved in research evaluating the safety and effectiveness of medications prescribed to children for ADHD, anxiety and depression. He is a past recipient of the Exemplary Psychiatrist Award from the National Alliance on Mental Illness (NAMI). Dr. Grcevich was recently recognized by Sharecare as one of the top ten online influencers in children’s mental health. His blog for Key Ministry, www.church4everychild.org was ranked fourth among the top 100 children's ministry blogs in 2015 by Ministry to Children.
View all posts by Dr. G →
This entry was posted in ADHD, Controversies and tagged ADHD, L. Alan Sroufe, medication in kids, MTA Study, New York Times, Ritalin, Ritalin Gone Wrong, spiritual development, stimulants. Bookmark the permalink.