We’re launching a new blog series today…Dissecting the DSM-5…What it Means for Kids and Families in which we’ll look at the implications of the new diagnostic criteria for mental illness for kids, families and those who serve them. In our first installment, we’ll examine more closely the implications of revisions in the diagnostic criteria for ADHD.

When most people think of ADHD, the image that often comes to mind is one of a school-age boy…angry, disrespectful, hyperactive, restless-the kind of kid who gets into fights on the playground, disrupts class, and all too frequently ends up in the principal’s office. For those of a certain age, the comic strip character Dennis the Menace embodies the perception of kids with ADHD. While accurate, kids who fit this prototypical description of ADHD are most definitely not the majority of kids we see in our practice with the disorder. 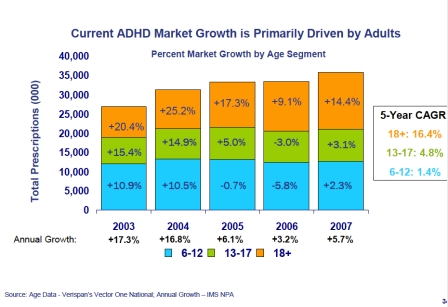 The last time I ran the numbers, the mean, median and modal age of kids coming to our practice who received a first-time diagnosis of ADHD was 13. If anything, the kids we’re now most likely to see may be a little older than that. Overall, most of the increase in the volume of prescriptions for ADHD medication since the last revision of the DSM has been for teens and adults (see graphic)…a study published last year by researchers at the National Institute of Mental Health reported that the prevalence of stimulant medication use increased from 4.2% to 5.1% among 6-12 year olds in the U.S. from 1996-2008, but rose from 2.3% to 4.9% among 13-18 year-olds.

The most important revisions in the diagnostic criteria take into account the reality that symptoms of ADHD persist into adulthood for many with the disorder, and that the functional impairment associated with ADHD may not be readily apparent for many kids prior to the teen years.

One revision changes the age by which symptoms of ADHD must be present from age 7 to 12. The wording of this stipulation also changed from “some hyperactive-impulsive or inattentive symptoms that caused impairment were present before age 7 years” in the DSM-IV to “several inattentive or hyperactive-impulsive symptoms were present prior to age 12 years” in the DSM-5, without making reference to functional impairment from ADHD symptoms prior to a certain date. The reality is that bright kids (or in some instances, obsessive and conscientious kids) with ADHD often find ways to compensate for their condition in school until the external demands placed upon their organizational skills become overwhelming in middle school, high school or college. We as clinicians have recognized this for some time, but the diagnostic criteria, if adhered to rigorously in the past, would have precluded teens struggling with the condition from being correctly identified and treated.

The new criteria also take into account the reality that older adolescents and adults frequently outgrow some aspects of ADHD by reducing the number of symptoms of inattention and/or hyperactivity-impulsivity required for a diagnosis for persons 17 and older from six to five. The symptom criteria in the DSM-IV were written to assist clinicians in diagnosing ADHD in children. Symptom descriptions have been revised in the DSM-V to make the criteria more applicable to older adolescents and adults.

In addition, the prohibition against making a diagnosis of ADHD in persons who meet criteria for an autism spectrum disorder has been removed in the DSM-5. Quoting directly from the manual,

When criteria for both ADHD and autism spectrum disorder are met, both diagnoses should be given.”

Difficulties with inattention are very common among kids I’m asked to see with autism spectrum disorders, and some have theorized specific developmental links explaining the high prevalence of inattentive symptoms among kids with autism.

No biological marker is diagnostic for ADHD.

Some might suggest the revisions in criteria might contribute further to significant increases in the number of children and teens receiving medication for ADHD. I’d suggest that those who are concerned about the increasing prevalence of the ADHD diagnosis need also to look at the outlandish demands for academic productivity, impossible schedules and sleep deprivation that that too many of our teens face on a daily basis before becoming excessively harsh in criticizing professionals seeking to be of help.

Thursday: The “R-word” has been banished…the new criteria for intellectual disability 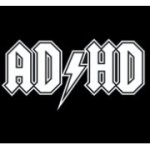 Key Ministry offers a resource center on ADHD, including helpful links, video and a blog series on the impact of ADHD upon spiritual development in kids and teens. Check it out today and share the link with others caring for children and youth with ADHD.

Dr. Stephen Grcevich serves as President and Founder of Key Ministry, a non-profit organization providing free training, consultation, resources and support to help churches serve families of children with disabilities. Dr. Grcevich is a graduate of Northeastern Ohio Medical University (NEOMED), trained in General Psychiatry at the Cleveland Clinic Foundation and in Child and Adolescent Psychiatry at University Hospitals of Cleveland/Case Western Reserve University. He is a faculty member in Child and Adolescent Psychiatry at two medical schools, leads a group practice in suburban Cleveland (Family Center by the Falls), and continues to be involved in research evaluating the safety and effectiveness of medications prescribed to children for ADHD, anxiety and depression. He is a past recipient of the Exemplary Psychiatrist Award from the National Alliance on Mental Illness (NAMI). Dr. Grcevich was recently recognized by Sharecare as one of the top ten online influencers in children’s mental health. His blog for Key Ministry, www.church4everychild.org was ranked fourth among the top 100 children's ministry blogs in 2015 by Ministry to Children.
View all posts by Dr. G →
This entry was posted in ADHD, Key Ministry, Mental Health and tagged ADHD, children, diagnostic criteria, dsm-5, medication, mental health, prevalence, teens. Bookmark the permalink.