Why are so many parents open to ADHD medication for their kids?

Over the past week, two respected colleagues sent me links to the Time Magazine article pictured at right seeking my response to the attention-getting title of a new book on ADHD from a behavioral pediatrician in Chicago.

While I’ll address some some of the inaccuracies in Dr. Saul’s statements at the end of this post, I was drawn to what I think is a far more interesting question…Given the stigma that exists about the use of medication for ADHD, the difficulty involved in accessing physicians with the knowledge and expertise to properly treat the condition, the cost of doctors’ visits and prescription medication (once-daily ADHD medication can easily cost $2,500 a year or more) and the extraordinary hassles involved with getting insurance companies to pay for what’s needed, why are so many parents pursuing the use of ADHD medication for their children?

In my practice, the vast majority of parents who present seeking my assistance for their kids with ADHD are most fearful about the long-term consequences of their child’s inability to perform in school at the level one would predict from their intelligence and their family’s ability to support their academic success.

Between the kids and families I see in my day job and my current experience as the parent of a bright high school senior entering the final stages of the college selection process upon completion of thirteen years of public education, the stark realities of the world in which our kids are expected to function hit me in the face on a daily basis. 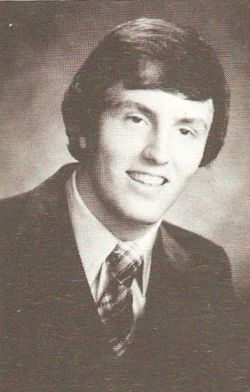 The volume of academic work kids are expected to produce today substantially exceeds what was expected of students in earlier generations. In 1972, one in 20 high school seniors spent 10 or more hours per week on homework. By 1992, that number increased to one in four. I’ve previously shared this review article examining the research on homework. 80% of U.S. teachers see homework as a tool for teaching organizational skills. According to one study, 82% of U.S. teachers graded homework vs. 14% in Japan and 6% in Germany. A recent study from Stanford University suggests the homework problem may be especially acute at high-performing high schools. As a result, kids with relative weaknesses in organizational skills and the capacity to complete large amounts of work quickly and efficiently operate at a MAJOR disadvantage in academic settings. For many, family life is centered around homework completion. When relationships between kids and parents begin to break down around homework struggles, can parents be blamed for seeking out all possible solutions to the problem?

The competition for slots in desired majors/colleges is markedly more intense than in my generation. Here’s an interesting study examining college admission practices from researchers at Harvard University and the University of Michigan. Here are some key findings…

Here’s one graph from the report that demonstrates the increase in competitiveness in college admission, comparing the 75th percentile SAT math scores of students accepted to different types of colleges from 1986 to 2013… 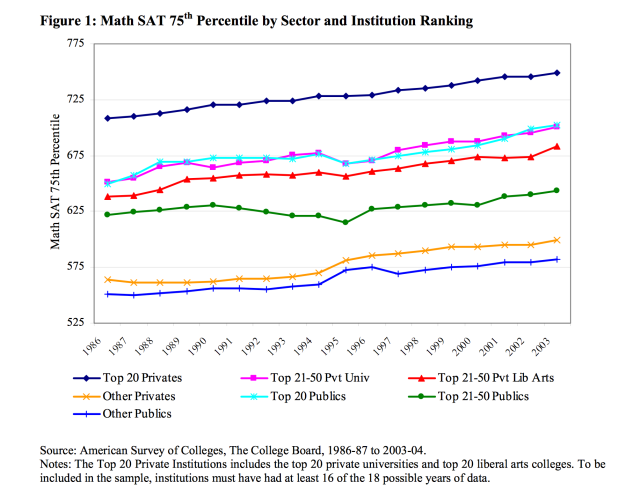 The consequences of suboptimal academic performance are far greater than they were when I was attending school. In 1972, only 29% of high school seniors applied to four year colleges…by 2004, this number increased to 53%. When I graduated from an elite public high school in 1979, a little over 60% of our class went on to college…but for those who did not, blue collar jobs were available in local auto and steel plants that paid solidly middle class wages. In 2012, the median wage for employed high school graduates was $9.50/hour…$2.00 above the Federal poverty line. Only three in ten high school graduates between 2006 and 2011 had found full-time employment by 2012.

The end result is that the consequences of a lack of success in our educational system can be dire, and if we conceptualize kids having to pass through an ever-increasing number of “round holes” in our schools, the desperation of parents to get their “square peg” through those round holes is mounting. The end result is that parents pursue medication, tutoring, alternative schools and other approaches for their kids who struggle academically because they fear the long-term consequences associated with academic underachievement.

While I have no doubt that he and/or his literary agent came up with a catchy title that will sell lots of books, his opinion doesn’t appear to be supported by the data. From the American Academy of Child and Adolescent Psychiatry’s Practice Parameters for the Diagnosis and Treatment of ADHD…

Upon reviewing the voluminous literature on ADHD, the American Medical Association’s Council on Scientific Affairs (Goldman et al., 1998) commented, Overall, ADHD is one of the best-researched disorders in medicine, and the overall data on its validity are far more compelling than for many medical conditions. Although scientists and clinicians debate the best way to diagnose and treat ADHD, there is no debate among competent and well- informed health care professionals that ADHD is a valid neurobiological condition that causes significant impairment in those whom it afflicts.

While Dr. Saul is correct in noting that there are lots of other conditions that can produce difficulties with attention, a thorough and detailed evaluation from a competent professional can generally differentiate these conditions from ADHD.

Finally, there is no evidence that large numbers of kids develop tolerance to the effects of stimulants. I’ve seen a few older kids develop tolerance who misused stimulants by dosing their medication to achieve around the clock effects. It’s also possible that some individuals on long-acting stimulants may develop some transient reduction in benefit from accumulating the drug in their system. Most patients who notice such an effect also notice the return of a robust response to medication if they take a brief medication holiday. Kids may occasionally require increases in medication dose as they get older because of increased expectations for academic productivity in middle school and high school. What many describe as “tolerance” is more accurately described as a environmentally-based change in demands upon executive functioning.

We know that lots of kids with relative weaknesses in their capacity to maintain attention when engaged in uninteresting tasks, kids with executive functioning weaknesses and kids with processing speed delays are struggling greatly to cope with the expectations they face on a daily basis in school. While we can all agree that kids who are struggling need a thorough evaluation from a competent professional who takes into consideration all the potential causes of the child’s difficulties, irresponsible statements that help to sell books but shame and blame parents acting out of fear and concern for their child’s well-being aren’t helpful.

Dr. Stephen Grcevich serves as President and Founder of Key Ministry, a non-profit organization providing free training, consultation, resources and support to help churches serve families of children with disabilities. Dr. Grcevich is a graduate of Northeastern Ohio Medical University (NEOMED), trained in General Psychiatry at the Cleveland Clinic Foundation and in Child and Adolescent Psychiatry at University Hospitals of Cleveland/Case Western Reserve University. He is a faculty member in Child and Adolescent Psychiatry at two medical schools, leads a group practice in suburban Cleveland (Family Center by the Falls), and continues to be involved in research evaluating the safety and effectiveness of medications prescribed to children for ADHD, anxiety and depression. He is a past recipient of the Exemplary Psychiatrist Award from the National Alliance on Mental Illness (NAMI). Dr. Grcevich was recently recognized by Sharecare as one of the top ten online influencers in children’s mental health. His blog for Key Ministry, www.church4everychild.org was ranked fourth among the top 100 children's ministry blogs in 2015 by Ministry to Children.
View all posts by Dr. G →
This entry was posted in ADHD, Advocacy, Controversies, Key Ministry and tagged ADHD, ADHD Does Not Exist, ADHD medication, Dr. Richard Saul, families, Parents. Bookmark the permalink.

4 Responses to Why are so many parents open to ADHD medication for their kids?