Matt Walsh is a popular blogger in the Christian community. He has over 250,000 Facebook followers, his writing is featured on other websites and he describes himself as being part of a community engaged in the battle for the traditional family. He’s developed his following (in part) by making very controversial statements about hot-button social topics. It’s how he makes his living and supports his family. I’d like to consider this post my contribution to his family’s sustenance.

In the middle of attending a wonderful conference on the topic of how the church can better care for and include persons with disability and their families, the mother of one of my patients messaged me with a link to Matt’s blog post from today on ADHD after her teenage son read the post this morning and was concerned about what she thought. I’ll share a brief sample with you to give you the flavor of his piece.

I have all of the “symptoms,” but I don’t have a disorder because there is no disorder. There might be people with legitimate disorders who get labeled with this one, but this one, this specific thing we refer to as ADHD, is a godforsaken lie. I don’t care who is upset by that statement, who will stop reading me because I said it, or how many angry and disappointed Facebook comments are coming my way. ADHD is a fraud…

I’ll share a little more. Having read Matt’s stuff in the past, I often find a kernel of truth in some of his statements that sometimes gets lost in a presentation style that seems designed to generate clicks, tweets and Facebook shares…

ADHD is not a matter of psychology or neurology, but of institutions. Schools can’t deal with kids who act this way, parents don’t want to deal with them, daycares aren’t equipped to deal with them, and society at large has no patience for any of it — so, we call it a disease and start passing out the prescription strength speed.

Does any Actual Illness work this way? If you go to the doctor complaining about bronchitis, will he ask you if the bronchitis is “creating problems at work on an ongoing basis”? No, because that doesn’t matter. Bronchitis is bronchitis is bronchitis. But ADHD is only ADHD in very specific circumstances. Public school, by the way, is a very specific (and temporary) circumstance. A child’s inability to succeed in that environment might be troubling for his parents, but it is not itself proof or indication of a mental defect. Why don’t we ever stop to consider that the defect lies in the institution that cannot function unless millions of its students are hopped up on drugs?

It’s true that with many of the conditions we categorize as mental illness in kids and teens, kids experience difficulty functioning in some environments, but not others. Matt’s personal story is very consistent with what I see among the kids we serve in our practice as they get older…when they’re old enough to either choose their area of study in school or choose a job with functional demands that fit the way they process and experience the world around them, ADHD becomes far less of a problem. 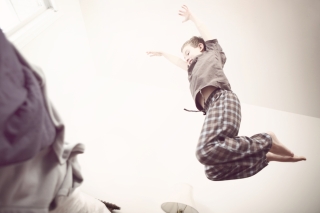 So…when do these traits cross the line into becoming a “disorder” for which treatment (medication, educational interventions, therapy) is indicated? When they significantly interfere with the individual’s functioning in two or more major life domains (I look at these domains as school/work, family, friends, and community).

What Matt’s right about is that the expectations we have for kids in our educational system  in terms of their capacity to sustain focus and generate gobs of academic product aren’t consistent with the way many of our kids are wired. Ben Conner described this phenomena in his wonderful little book, Amplifying Our Witness…

“It is our culture that disables.”

“When one is disabled, the problem is not really that they have impairments and social skill deficits. The issue at stake is that they live in an ‘ableist’ culture that rarely affords them the space or opportunity to make their unique contribution to society and does not lift up the value of choosing them as friends.”

Unfortunately, the consequences of failure in school are far more significant now than they were for my generation. Matt may have failed chemistry in high school, but modern-day Matts who fail chemistry don’t qualify for the scholarships that they need to attend college. The battles that parents engage in to get their kids with ADHD through school destroy the relationships that form the foundation of the influence parents have in shaping character.

The kids I see in my practice don’t want to have this. Much to the chagrin of the drug companies, most patients with ADHD take medication only take it when they absolutely need it. Try telling a kid who spends six hours a night doing the schoolwork that their friends get done in two that they don’t have a disorder. Or the kid who is having an anxiety attack at home after forgetting to bring home the right books from school for the third time in a week. Or the kid who struggles with impulse control and emotional self-regulation to the point that they can’t make or keep a friend? Or the family that has been asked to leave church because their child struggles with self-control?

The vast preponderance of parents who come through our practice are slow to accept a diagnosis of ADHD and anxious to find alternatives to medication as a treatment strategy. The ones who are out there looking for a pill after downloading a checklist from the Internet pretty much conclude that we’re not the place for them before they get to the end of our phone screen in the office. Not many realize that the odds of a marriage ending in divorce if a child has ADHD are greater than those marriages in which a child is diagnosed with autism.

Our parents are fighting to do the best they can for their kids in the face of an educational and healthcare bureaucracy with a propensity for pounding square pegs into round holes. They’re uncomfortable enough without someone in their culture with a platform shaming them by implying that their kid’s problems may result from parenting issues while communicating to their friends and neighbors that their kid has a non-existent condition. Way to go in supporting the traditional family, Matt! Sarcasm intended.

I’m speaking this Friday on the topic of how churches (and the community) can better serve and include kids with mental illness. One of the challenges we face in getting churches to serve families with the issues we see in our practice is that no one sees a need for intentional disability ministry outreach for those who aren’t thought to have a disability. Matt and others like him aren’t making my task any easier.

Responsibility comes with having a platform. Articles like this one…articles that leave my teenage patients questioning whether they have a genuine condition, have consequences. Google “Jenny McCarthy” and “measles,” for example.  We can do better than this in the Christian subculture.

For your reading pleasure, I direct you to the 148 published papers I found on the National Library of Medicine website using the search terms “neuroimaging,” “genetics” and “ADHD.”

Dr. Stephen Grcevich serves as President and Founder of Key Ministry, a non-profit organization providing free training, consultation, resources and support to help churches serve families of children with disabilities. Dr. Grcevich is a graduate of Northeastern Ohio Medical University (NEOMED), trained in General Psychiatry at the Cleveland Clinic Foundation and in Child and Adolescent Psychiatry at University Hospitals of Cleveland/Case Western Reserve University. He is a faculty member in Child and Adolescent Psychiatry at two medical schools, leads a group practice in suburban Cleveland (Family Center by the Falls), and continues to be involved in research evaluating the safety and effectiveness of medications prescribed to children for ADHD, anxiety and depression. He is a past recipient of the Exemplary Psychiatrist Award from the National Alliance on Mental Illness (NAMI). Dr. Grcevich was recently recognized by Sharecare as one of the top ten online influencers in children’s mental health. His blog for Key Ministry, www.church4everychild.org was ranked fourth among the top 100 children's ministry blogs in 2015 by Ministry to Children.
View all posts by Dr. G →
This entry was posted in ADHD, Controversies, Key Ministry, Mental Health and tagged ADHD, church, Disability Ministry, families, Inclusion, Key Ministry, Matt Walsh, parenting, responsibility, stigma. Bookmark the permalink.