Are you less likely to be referred to a psychiatrist if your physician is a Christian?

In the sixth installment of our Winter 2015 blog series, Sin, Mental Illness and the Church, we look at a study suggesting that Christian physicians are less likely to refer patients presenting with a potential mental health concern to psychiatrists and more likely to refer to pastors or religious counselors.

Thus far in our series, we’ve looked at some of the key people and ideas that have influenced attitudes and beliefs around mental illness within reformed and evangelical Protestantism in the U.S. Today, we’ll go a step further and explore the possibility that attitudes in the church about mental illness may have a significant impact on referral patterns among patients in need of care for a mental health condition.

I’d like to share an interesting study published in 2007 from the journal Psychiatric Services looking at precisely this topic. Here’s the abstract:

METHODS:
Surveys were mailed to a stratified random sample of 2,000 practicing U.S. physicians, with an oversampling of psychiatrists. Physicians were queried about their religious characteristics. They also read a brief vignette about a patient with ambiguous psychiatric symptoms and were asked whether they would refer the patient to a clergy member or religious counselor, or to a psychiatrist or a psychologist.

At the time of this study, 51% of U.S. adults identified as Protestant, 24% as Catholic, 1.7% as Jewish and 16% as unaffiliated/none. While 39% of U.S. physicians are Protestant and 22% are Catholic, only 27% and 10% of psychiatrists are, respectively. Consider this…while Protestant adults outnumber Jewish adults by 30:1, in this sample Jewish psychiatrists slightly outnumber Protestant colleagues. 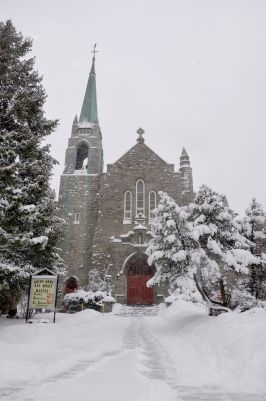 With that said, one major weakness of this study is the failure to further differentiate the church affiliation or beliefs of the physicians within the “Protestant” category. If the Biblical Counseling movement emerged from a conservative tradition with a deep mistrust of mental health disciplines rooted in a theoretical framework at odds with Scripture, one might hypothesize a physician rooted in a denominational tradition emphasizing the infallibility of the Bible and teaching that salvation through grace by faith in Jesus Christ represents the only way to Heaven (Southern Baptists, Evangelical Free Church, PCA) might have a very different attitude about referring to psychiatry than would a physician associated with certain “mainline” denominations (Episcopalians, United Church of Christ, PC-USA to name a few). I would personally hypothesize (after 29 years in the field) that the vast majority of psychiatrists who would identify as “Protestant” would identify with churches or denominations with more “liberal” attitudes about interpretation of Scripture and human sexuality.

It’s difficult after reviewing the study to argue that physicians who identify with the church haven’t been impacted by attitudes of influential leaders opposed to mental health treatment. There may be other explanations for the findings presented in the study, including…

The take-home point from this study is that in response to mild or moderate symptoms of mental distress, religious and nonreligious physicians appear to look for help in different places, with the result that the religious characteristics of physicians determine to some extent whether their patients receive evaluations from psychiatrists. The causes of the pattern are far less clear.

Dr. Stephen Grcevich serves as President and Founder of Key Ministry, a non-profit organization providing free training, consultation, resources and support to help churches serve families of children with disabilities. Dr. Grcevich is a graduate of Northeastern Ohio Medical University (NEOMED), trained in General Psychiatry at the Cleveland Clinic Foundation and in Child and Adolescent Psychiatry at University Hospitals of Cleveland/Case Western Reserve University. He is a faculty member in Child and Adolescent Psychiatry at two medical schools, leads a group practice in suburban Cleveland (Family Center by the Falls), and continues to be involved in research evaluating the safety and effectiveness of medications prescribed to children for ADHD, anxiety and depression. He is a past recipient of the Exemplary Psychiatrist Award from the National Alliance on Mental Illness (NAMI). Dr. Grcevich was recently recognized by Sharecare as one of the top ten online influencers in children’s mental health. His blog for Key Ministry, www.church4everychild.org was ranked fourth among the top 100 children's ministry blogs in 2015 by Ministry to Children.
View all posts by Dr. G →
This entry was posted in Controversies, Key Ministry, Mental Health and tagged Biblical Counseling, Christian physicians, Christianity, mental health, pastoral counseling. Christian Counseling, psychiatry, referrals. Bookmark the permalink.

1 Response to Are you less likely to be referred to a psychiatrist if your physician is a Christian?