Our team at Key Ministry is honored and delighted to announce Joni Eareckson Tada as our Keynote Speaker for this year’s Inclusion Fusion Disability Ministry Web Summit, to be available everywhere on November 12th-13th, 2014.

Joni serves as the Founder and CEO of Joni and Friends International Disability Center, and is an international advocate for people with disabilities. A diving accident in 1967 left her, then 17, a quad­riplegic in a wheelchair, without the use of her hands. After two years of rehabilitation, she emerged with new skills and a fresh determination to help others in similar situations.

During her rehabilitation, Joni spent long months learning how to paint with a brush between her teeth. Her high-detail fine art paintings and prints are sought-after and collected.

Her best-selling autobiography Joni and the feature film of the same name have been translated into many languages, introducing her to people around the world. Mrs. Tada has also has visited more than 47 countries. 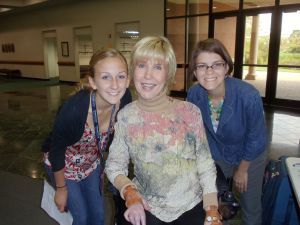 Mrs. Tada has served on the National Council on Disability and the Disability Advisory Committee to the U.S. State Department. She has helped guide evangelism strategies among people with disabilities worldwide as Senior Associate for Disability Concerns for the Lausanne Committee for World Evangelization.

She has received numerous awards and honors, including the Victory Award from the National Rehabilitation Hospital and the Golden Word Award from the International Bible Society. Joni has been awarded several honorary degrees, including: Doctor of Divinity from Westminster Theological Seminary; a Doctor of Humanitarian Services from California Baptist University; and a Doctor of Humane Letters by Indiana Wesleyan University where she was inducted into IWU’s Society of World Changers

Joni has written over 50 books. She has received the Gold Medallion Lifetime Achievement Award from the Evangelical Christian Publishers Association. Joni’s latest book is Joni & Ken: An Untold Love Story published by Zondervan.

Since 1982, Joni has been hosting the short-feature radio program “Joni and Friends” which is aired on more than 1,000 outlets. In 2012, the National Religious Broadcasters inducted Joni into its Hall of Fame.

In 2012 The Colson Center on Christian Worldview awarded Joni its prestigious “William Wilberforce Award.” She has been interviewed on “Larry King Live,” “ABC World News Tonight,” and in magazines such as Christianity Today and World Magazine.

Joni and her husband, Ken Tada, have been married since 1982.

Inclusion Fusion is a Disability Ministry Web Summit made available free of charge by Key Ministry.  The conference is an opportunity for Christ followers everywhere to share ideas and resources to advance the movement to fully welcome and include children and adults with disabilities and their families in the life of the local church. The theme of Inclusion Fusion 2014 is INNOVATION.

Inclusion Fusion offers prerecorded videos made available “on-demand” to conference registrants, supplemented by interactive online chats and experiences. We encourage discussion of diverse ideas and views and promote the development of new relationships between pastors, church leaders, and families. We seek to promote a dialogue around how to most effectively share God’s love with families who historically have confronted substantial barriers to church participation and form relationships that advance the building of God’s Kingdom.

Our two previous Web Summits involved 46 speakers representing a broad range of ministry interests and passions. Videos from Inclusion Fusion have been viewed well in excess of 20,000 times. Check out all of our past Inclusion Fusion presentations at Key Ministry’s NEW You Tube channel!

We encourage you to register for this year’s Web Summit. Advance registrants will receive invitations to exclusive, pre-summit events and activities. You can click this link to access our registration form, or scan the QR code pictured at right. Later this week, we’ll be releasing the full speaker lineup for Inclusion Fusion 2014. Help us get the word out by using the hashtag #KMIF14 (short for Key Ministry Inclusion Fusion 2014).

Dr. Stephen Grcevich serves as President and Founder of Key Ministry, a non-profit organization providing free training, consultation, resources and support to help churches serve families of children with disabilities. Dr. Grcevich is a graduate of Northeastern Ohio Medical University (NEOMED), trained in General Psychiatry at the Cleveland Clinic Foundation and in Child and Adolescent Psychiatry at University Hospitals of Cleveland/Case Western Reserve University. He is a faculty member in Child and Adolescent Psychiatry at two medical schools, leads a group practice in suburban Cleveland (Family Center by the Falls), and continues to be involved in research evaluating the safety and effectiveness of medications prescribed to children for ADHD, anxiety and depression. He is a past recipient of the Exemplary Psychiatrist Award from the National Alliance on Mental Illness (NAMI). Dr. Grcevich was recently recognized by Sharecare as one of the top ten online influencers in children’s mental health. His blog for Key Ministry, www.church4everychild.org was ranked fourth among the top 100 children's ministry blogs in 2015 by Ministry to Children.
View all posts by Dr. G →
This entry was posted in Inclusion Fusion, Key Ministry and tagged #KMIF14, Disability Ministry, free ministry training, Inclusion Fusion 2014, Joni Eareckson Tada, Key Ministry, registration, Special Needs Ministry. Bookmark the permalink.