Jeff Davidson…How do you overcome becoming a vacant dad? 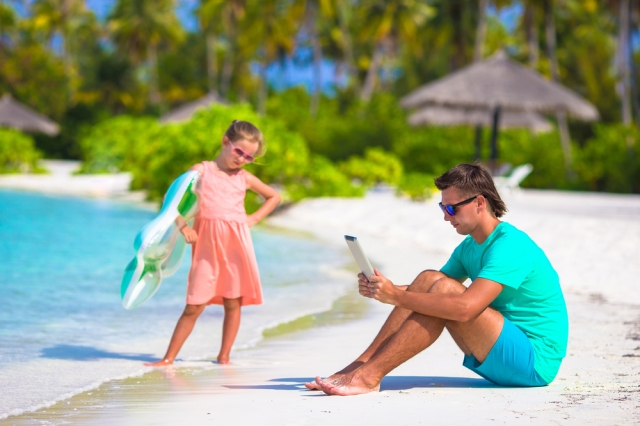 I thought I was ready to be a dad. My own father had been a great role model in my life and I had many mentors and friends who had experienced the joys of fatherhood.

But I didn’t know anyone who was the dad of a child with profound special needs.

When my own son—Jon Alex—was born, I went into a tailspin of despair, blame, denial, anger, and confusion. I was lost.

Where are the dads?

More and more often, we are losing the dads of children with special needs within just a few years of diagnosis. But there are two types of vacant dads. One is the dad who walks out on his family and responsibilities, leaving his spouse to raise their child or children alone.

But there is another type of vacant dad. And he is just as dangerous and as likely to occur. That’s the dad who is still in the household, but he is not engaged, he’s not involved, and he’s not actively fulfilling his roles and responsibilities to his family. He’s a vacant dad too. And he’s just as guilty as the dad who walks out on his family. He’s walked out as well, in every way but physically.

Spotting vacant dads is pretty easy. I just have to look in the mirror and remind myself of what it was like for me when I first began this journey as a special needs dad. I had no plan. No plan at all. I had always prided myself on the belief that, given enough time, I could solve any problem, fix any circumstance, and overcome any obstacle. Now I had no idea what to do.

I couldn’t even bring myself to admit there was a challenge in the first place. My son had autism and cerebral palsy, but if I didn’t say it out loud, perhaps over time it would go away. As long as I didn’t say the word “autism,” then my son really didn’t have it. I nuanced it for years.

“He’s on the spectrum, but he’s not autistic.”

“He has sensory processing issues, but he’s not autistic.”

I was an ostrich-dad, sticking my head in the sand to avoid reality and to avoid noticing the obvious. I lived in denial and anger for the first couple of years. I almost let them destroy me.

Now after all these years I realize I was a typical dad stuck in denial and emotionally paralyzed by my fear and lack of understanding and acceptance. I was dangerously close to becoming a vacant dad.

We knew so little about autism sixteen years ago. We didn’t know that by 2015, one in sixty-eight children would be diagnosed on the autism spectrum, according to the Centers for Disease Control. We didn’t know it would affect one in forty-two boys by this time. We didn’t anticipate that, if the current growth rate continues unabated, one in every two boys could be affected by 2025.

So I lived in denial. I see it so often now with dads. Rather than embrace the challenge, we flee from the fight. Rather than admit our children are not what we expected, we rationalize and attempt to dismiss the very idea that our child may have challenges.

As a dad, your natural first response is, “I can fix this.” I was constantly researching therapies, dietary intervention, treatments, and medications. I relentlessly poured myself into solving this puzzle of a child with which I had been presented.

I was too busy fixing my son to just be his dad. When I ultimately realized I was not going to fix my son overnight, I made the mistake so many other dads make, taking the first slippery step toward the cliff of becoming a vacant dad; I retreated to something I could fix and master. I retreated and threw myself back into something I could control and that I was good at. 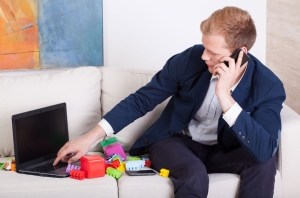 For me, it was work. Every night I would hole up in my basement home office and work until everyone else went to bed. I invented tasks and responsibilities that couldn’t wait until the next day and had to be addressed at night. My wife would actually call me on my home office line to tell me everyone was going to bed.

I hid in plain sight behind my desk and with my job. I justified it by believing I was doing what is required of a dad by providing financially for my family. But that was just an excuse. Just like some dads who choose to hide on the golf course, in the woods or on the lake, in their garage, workshop, or basement with a favorite hobby.

I tried to escape. And you will be tempted to do so as well.

But that’s what vacant dads do. We try to escape. We crawl into the cave of denial and anger and we wander among its stalagmites.

I was also angry and searching for someone to blame. Had God caused this to happen? Was God punishing us? Had we done something wrong? I was mad at God, mad at the world, and mad at my circumstances.

My search for someone to blame just led to more bitterness, frustration, confusion, and anger. Almost every new special needs dad I meet goes through four distinct seasons of emotions:

I remember resenting going to other kid’s birthday parties or talking to other dads. I loathed watching other children play or hear their parents discussing their growth and development. I wrote these words in my first book, No More Peanut Butter Sandwiches:

“Secretly, I fantasized about building a massive bonfire out of those baby milestone books and having a giant book-burning party. I could see myself silhouetted against the shadows of this massive fire and I would invite all parents of children with special needs to come throw their milestone books on the fire as it stretched towards a blood-red sky. We would feel the glow of the fire against our faces as we shook our fists and raged at an unseen God.”

I wasted the first six years of my son’s life becoming a vacant dad because I wasn’t ready.

Next week I will share my personal story of how I overcame being a vacant dad, and what steps you can take in your life to become the special needs dad God has called you to be. 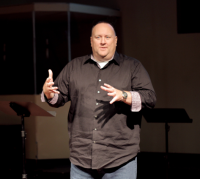 Dr. Stephen Grcevich serves as President and Founder of Key Ministry, a non-profit organization providing free training, consultation, resources and support to help churches serve families of children with disabilities. Dr. Grcevich is a graduate of Northeastern Ohio Medical University (NEOMED), trained in General Psychiatry at the Cleveland Clinic Foundation and in Child and Adolescent Psychiatry at University Hospitals of Cleveland/Case Western Reserve University. He is a faculty member in Child and Adolescent Psychiatry at two medical schools, leads a group practice in suburban Cleveland (Family Center by the Falls), and continues to be involved in research evaluating the safety and effectiveness of medications prescribed to children for ADHD, anxiety and depression. He is a past recipient of the Exemplary Psychiatrist Award from the National Alliance on Mental Illness (NAMI). Dr. Grcevich was recently recognized by Sharecare as one of the top ten online influencers in children’s mental health. His blog for Key Ministry, www.church4everychild.org was ranked fourth among the top 100 children's ministry blogs in 2015 by Ministry to Children.
View all posts by Dr. G →
This entry was posted in Parents, Special Needs Ministry and tagged Christian parenting, Disability Ministry, fatherhood, Jeff Davidson, Key Ministry, No More Peanut Butter Sandwiches, parenting, Rising Above Ministries, special needs, Special Needs Ministry, vacant dads. Bookmark the permalink.