Am I to blame for this happening?

Editor’s note: Here’s the fourth post in Jeff Davidson’s series… Facing the Elephants in the Room, in which he looks at the overwhelming, but unspoken challenges confronting parents of kids with special needs. Last week’s post, Special needs parents…Do you feel cheated? may be found here.

So why did this happen in the first place? Why was my child born with special needs? Did God do this to punish us? Are we to blame for this happening? Those are some of the questions that torment many special-needs dads.

My wife and I wrestled with these questions for many months. Until one Scripture changed everything for us. Eleven words that changed our lives.

As he (Jesus) passed by, he saw a man blind from birth. And his disciples asked him, ‘Rabbi, who sinned, this man or his parents, that he was born blind?’ Jesus answered, ‘It was not that this man sinned, or his parents, but that the works of God might be displayed in him.

The words leaped off the page at me, especially the last eleven words. “But that the works of God might be displayed in him.”

Someone must be at blame right? It has to be someone’s fault. They, too, were searching for an explanation or someone to blame. Yet Jesus declares that this man had been born blind so that the works of God could be displayed in his life. Some translations even say “the power of God” or “glory of God.” Was it possible that my son’s special needs could really be part of God’s plan to display His works and power through my son’s life?

Is God really intending to take our suffering and redeem it to demonstrate His great power and works? How is that even possible?

Are our children’s disabilities part of God’s plan to bring glory and honor to Him by somehow using his life in ways we cannot fathom or ever imagine? Would God allow something to happen because what He wants to accomplish through it is far greater and more significant to His purposes?

Confirmation can be found in Psalm 139 where David, speaking of God, writes:

For you formed my inward parts; you knitted me together in my mother’s womb. I praise you, for I am fearfully and wonderfully made. Wonderful are your works; my soul knows it very well.

My frame was not hidden from you, when I was being made in secret, intricately woven in the depths of the earth. Your eyes saw my unformed substance; in your book were written, every one of them, the days that were formed for me, when as yet there was none of them.

God has declared that our children are fearfully and wonderfully made just the way they are. And not only that, but God already knows what will become our children’s life stories. He had a plan for their lives.

When I first grasped this concept I was stunned. I grabbed a legal pad and wrote the phrase “Wonderfully made … created for a plan and a purpose … destined to glorify God.”

I decided that very day that those are the words I would choose to use in describing our son. The world would say that he was autistic or challenged, but I chose instead to say of him, “He is wonderfully made, created for a plan and a purpose, and destined to glorify God.”

God had declared it and I chose to believe it. Yes, he was still afflicted with his cerebral palsy, but God not only created him but He created my son in His own image. God was decreeing that he was wonderfully made and that God himself had determined the plan for all the days of his life and had written them down before Jon Alex was ever born.

The fact that our children have special needs or disabilities did not catch God by surprise. God did not get up off the sofa one day, go to the kitchen to get a drink, and come back surprised that you are a special-needs dad.

He didn’t slap his head and exclaim, “Whoa, when did that happen? I was just gone for a minute!”

To search for someone to blame implies your child with special needs was a mistake. But Scripture clearly implies this was no mistake. The sooner you realize this was not a mistake, but rather a gift from God, that perspective will change your life. 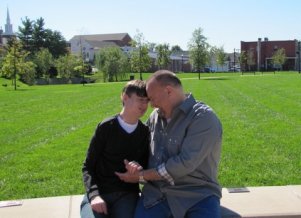 Dr. Stephen Grcevich serves as President and Founder of Key Ministry, a non-profit organization providing free training, consultation, resources and support to help churches serve families of children with disabilities. Dr. Grcevich is a graduate of Northeastern Ohio Medical University (NEOMED), trained in General Psychiatry at the Cleveland Clinic Foundation and in Child and Adolescent Psychiatry at University Hospitals of Cleveland/Case Western Reserve University. He is a faculty member in Child and Adolescent Psychiatry at two medical schools, leads a group practice in suburban Cleveland (Family Center by the Falls), and continues to be involved in research evaluating the safety and effectiveness of medications prescribed to children for ADHD, anxiety and depression. He is a past recipient of the Exemplary Psychiatrist Award from the National Alliance on Mental Illness (NAMI). Dr. Grcevich was recently recognized by Sharecare as one of the top ten online influencers in children’s mental health. His blog for Key Ministry, www.church4everychild.org was ranked fourth among the top 100 children's ministry blogs in 2015 by Ministry to Children.
View all posts by Dr. G →
This entry was posted in Families, Intellectual Disabilities, Key Ministry, Parents, Special Needs Ministry and tagged Disability Ministry, facing the elephants in the room, Jeff Davidson, Key Ministry, No More Peanut Butter Sandwiches, parenting, Psalm 139, Rising Above Ministries, Special Needs Ministry, Wonderfully Made. Bookmark the permalink.

1 Response to Am I to blame for this happening?