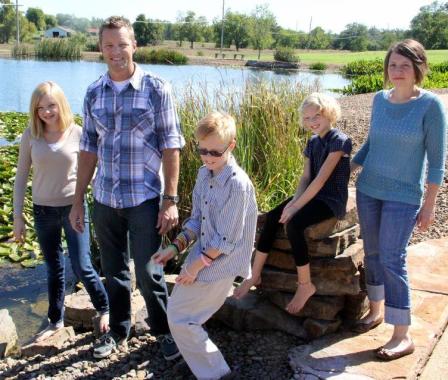 In celebration of Autism Awareness Month, we plan to introduce our readers to several fathers of children with autism who were led to serve families impacted by disabilities because of their experiences. First up today is Joe Butler of Ability Tree.

Joe is an Assemblies of God U.S. missionary to persons with disabilities and their families. Joe and his wife, Jennifer, founded Ability Tree as a religious nonprofit corporation in June of 2010. Joe holds a B.A. in Bible from Valley Forge Christian College and is graduating in May from California Baptist University with an M.A. in Disability Studies, with a concentration in Disability Ministry. Joe and Jen live in Northwest Arkansas with their three children, Hannah, Micah, and Clara. Here’s Part One of his family’s story. We’ll share Part Two this coming Tuesday.

December 29th, 2000, was the day Micah was born, and the day that forever changed the direction of our lives. Two days earlier, we had just sold our house in New Jersey and moved onto a Christian college campus in eastern Pennsylvania to pursue my degree in pastoral ministry. I wasn’t sure what the future held, but I was sure we were heading in the right direction.

I started taking classes full-time and working two part-time jobs during the semester and full-time during the Summer. My wife, Jen, had the full-time job of caring for our two year old daughter Hannah, and a newborn. From day one, Micah had a difficult time eating and sleeping. At his three month old check-up, we were already asking questions about his behavior and development. At nine months old, Micah was diagnosed with developmental delays. Which basically meant that he wasn’t achieving typical developmental milestones for his age.

In the Fall of 2001, Micah started receiving early intervention. Physical, occupational, and speech therapists frequented the college campus three days a week while the other days were filled with trips to Children’s Hospital of Pennsylvania for additional therapies and check-ups. We were doing everything we could do for Micah. Oftentimes, as parents, we felt overwhelmed and out of control. During those times we just did what comes naturally as parents, we continued to love and get to know our child.

Wednesday, May 7th, 2003, is a day, as a dad, I’ll never forget. We went to our church’s midweek service that night. After service, Jen picked up Micah from the nursery and brought him to me. I sat him on my lap, facing me, while I was finishing up a conversation. I felt him leaning back and I said, “Micah, sit up.” As I looked at him and said it again, I noticed that his eyes were starting to roll back in his head and he was starting to shake. Within minutes he was convulsing uncontrollably. I remember carrying him to the foyer of the church and calling for help. Two nurses, who attended our church, were there that night and cared for Micah while we waited for the paramedics to arrive. They took Micah by ambulance to the nearest hospital where they sedated him some 45 minutes later to stop the seizure. Once he was sedated they transferred him to a children’s hospital for further tests and scans.

Jen went with Micah in the ambulance on the initial trip as well as during the transfer. I had to follow in our vehicle. The hospital’s policy was that only one parent could stay overnight in the room. Jen stayed and I went back to our college apartment. I still have the picture of my son in my mind from that night right before I left. He was out cold in a hospital crib with tubes and monitors connected all over his little two year old body. If I could have taken his place, I would have.

Our oldest daughter Hannah, who was five at the time, and witnessed Micah’s seizure, spent the night at a friend’s house that night to keep her mind off of the situation. I went back to our college apartment and fell onto our bed. I remember crying out, “Why is this happening?” That night as I stared up at the ceiling, God reminded me that children are a gift from Him, and that He knew Micah before He formed him in Jen’s womb. He assured me in my spirit that He had a plan for Micah’s life and that He was in control.

I think God was preparing me for the report I was about to hear from the doctors. The neurologists said there were “abnormalities” in Micah’s brain, “that his white and grey matter were thinning.” Bottom line, they weren’t sure if Micah would walk, talk in complete sentences, or be independent someday. Don’t get me wrong, I was thankful for the diligence and care that the doctors gave Micah, but there just wasn’t much hope in their message. He was diagnosed with having cerebral palsy (and later with autism), a result, most likely, of a lack of oxygen during the first trimester of Jen’s pregnancy. Reality began to set in. This was more than a developmental delay.

On Tuesday, July 1, 2003, our third child Clara was born, six weeks early. Jen had a gallbladder attack, the previous Sunday morning and was rushed to the hospital. Clara spent nine days in the neonatology intensive care unit (NICU) before coming home. Micah loved his new little sister and she became a motivator for him. He didn’t want her to surpass him in any milestones. Micah continued to work hard, through a variety of therapies, to accomplish what most children learn naturally, like walking, talking, and fine motor skills.

I graduated in May of 2004, and took a full-time associate pastor position in southern New Jersey. It was there that Micah learned to walk independently at the age of four. The size of the church was fairly large and there were several other families with children with special needs. Because of my role as associate pastor and because my wife and I were the parents of a child with special needs, other families looked to us for counsel and direction.

Fast forward to the present day. Hannah is 14, Micah is 12, and Clara is 9. Life with Micah has taught our family very valuable lessons-to enjoy the everyday moments and happenings in life. Don’t take anything for granted. Notice the delivery trucks on your way to work and say hello to the greeter at Walmart. Get excited when you see a dog or cat and even more excited when you see a family member. Say, “I love you” several times a day. Don’t be afraid to cry, or make a mistake, or say, “you’re sorry.” Live life to the fullest.

To be continued… On Tuesday, Joe will share the the story of what his family is doing through a nonprofit organization they founded several years ago.

Ability Tree reaches out to families impacted by disability through recreation, education, support and training (R.E.S.T.). We aim to partner with individuals and organizations to raise awareness and build support networks to strengthen and grow able families.

The Ability Camp allows people with intellectual and/or physical disabilities to take part in various camp-style activities that they may not be able to participate in otherwise, and gives caregivers a 5-day respite. Watch this video to see what the Ability Camp is all about.

Dr. Stephen Grcevich serves as President and Founder of Key Ministry, a non-profit organization providing free training, consultation, resources and support to help churches serve families of children with disabilities. Dr. Grcevich is a graduate of Northeastern Ohio Medical University (NEOMED), trained in General Psychiatry at the Cleveland Clinic Foundation and in Child and Adolescent Psychiatry at University Hospitals of Cleveland/Case Western Reserve University. He is a faculty member in Child and Adolescent Psychiatry at two medical schools, leads a group practice in suburban Cleveland (Family Center by the Falls), and continues to be involved in research evaluating the safety and effectiveness of medications prescribed to children for ADHD, anxiety and depression. He is a past recipient of the Exemplary Psychiatrist Award from the National Alliance on Mental Illness (NAMI). Dr. Grcevich was recently recognized by Sharecare as one of the top ten online influencers in children’s mental health. His blog for Key Ministry, www.church4everychild.org was ranked fourth among the top 100 children's ministry blogs in 2015 by Ministry to Children.
View all posts by Dr. G →
This entry was posted in Advocacy, Autism, Families, Inclusion, Key Ministry, Resources, Stories and tagged Ability Tree, Autism, Disability Ministry, Inclusion, Jennifer Butler, Joe Butler, Key Ministry, Micah Butler, Special Needs Ministry. Bookmark the permalink.