The Whispers of Hope…Dave Lynden 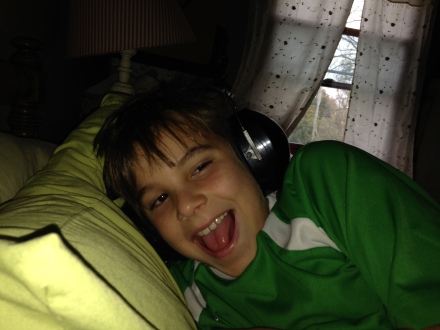 In the sixth installment in David Lynden’s blog series on Spiritual Autism he examines how God offers us “little rays of hope” in the busyness of life…and the importance of holding onto that hope.

Hope is what we are really striving for in this world of static systems. We can sometimes get glimpses of a world that once was, a world long forgotten, a world where we knew God and did not need clichés that, quite frankly, no one really believed when it came to this “relationship with God”. But, these glimpses fade away so quickly, it is like grasping at smoke. And it so easy to get lulled to sleep by the routines of life that we miss both the small moments, these little wonders of everyday life as well as the startling jolts out of the routine that shout out unexpectedly that there is a God who wants to know us and a world to come that will restore all that was lost. I have had many of these moments in the midst of Micah’s routines. It seems as though God uses my own routines to insert little opportunities for me to break free from my spiritual autism and see true hope. I caught one of these moments while putting Micah to bed one evening. I caught another moment sitting in the living room just after tucking him and his siblings in for the night and watching one of my favorite movies…for the twelfth time.

Now Micah has a set routine for just about everything. When he heads outside to get on the bus for school, he steps just outside the garage and finds the same spot and hops back and forth five times. And when he gets off the bus, he checks the mailbox and then hops five times up the driveway before settling into a skip/walk the rest of the way to the house. And when it is time for bed, he turns on the fan (for the white noise, I assume, since it is not pointing towards him), sits on his knees at the side of the bed and then picks up some imaginary something-or-other from the carpeted floor and pretends to toss it into his bed…five times. Then, I lie next to him in bed and read a story to him while he gets situated. His favorite is a children’s Bible with lots of pictures, though he also loves the book, Man Gave Names to All the Animals by Bob Dylan (I read it in my Bob Dylan voice for both of our entertainment). Then, we turn out the light, I sing him a Jewish prayer called the “Shema” followed by my own prayer for him at the end…and then comes another routine. He calls out for a “zerbertz” (blowing farty noises on his belly) and then a “Mike Tyson” (an ear nibbling), another zerbertz, another Mike Tyson and three “tickles”, a spasmodic all-out tickle attack targeting the belly, knees, feet, neck and -as he calls them- “underarm pitties”. Finally, I tell Micah, “I love you, Micah” and he responds by saying, “I love you, Micah”. I then correct him by saying “no” and then point at myself, to which he then makes the adjustment and says, “I love you…daddy”. Then, and only then, is Micah ready to settle in for the night.

So, one night we read our book and did the zerbertz, Tyson, tickle routine. I finished with, “I love you, Micah” and he whispered, “I love you, daddy”. I kissed him goodnight and trudged downstairs to watch one of my top ten favorite movies, The Shawshank Redemption…for the twelfth time (yes, I have my own routines). The movie had just begun when I suddenly realized that Micah had said, “I love you, daddy” without the correction. I pondered that little ray of hope before settling into my own routine of watching the story of Andy Dufresne (played by Tim Robbins) and his friendship with Ellis “Red” Redding (played by Morgan Freeman) and a story all about hope.

In a nutshell, The Shawshank Redemption is a story about a banker who is suddenly dragged out of his normal world when he is found guilty of murdering his wife and her lover and transported to Shawshank Prison. Andy has a very rough beginning to prison life. His education (he was a banker) makes him something of an outsider and he is targeted by a savage group of inmates who call themselves “The Sisters”. But, eventually he begins to not just move along with the routines of prison life. He begins to find redemptive things to do. He begins a friendship with Red and starts introducing the inmates to the concept of hope. He finds hope everywhere- in the music of a Soprano duet, in helping inmates attain their GED, in shaping his own chess pieces with his miniature rock hammer in order to engage Red in chess matches for a time to simply play. He is able to take the library with a few Reader’s Digest books and some magazines and turn it into a first-rate prison library equipped to give the inmates an education and the hope to make it on the outside.

Andy gets used to the idea of confining his own hope within the prison walls until a new inmate, Tommy, puts some past experiences together and Andy’s innocence is able to be established. That hope is dashed by Warden Norton (the tyrannical slave master in this hero story) who is using Andy’s financial skills to cover up all of the money trails he is making through scandalous dealings outside the prison gates. Norton has Tommy shot and makes it look like an attempted prison break. But, these years in prison have also given Andy the chance to burrow a hole from his wall to the sewer pipes with his rock hammer. He escapes Shawshank and flees to Mexico to a place on the Pacific where all of the horrors he has lived through can be forgotten. But, before he goes, he pushes Red to make a promise to him. If Red ever gets out, he must look for a particular field in the town of Buxton, and for a particular oak tree in that field where Andy had proposed to his wife…and for a peculiarly placed, black volcanic rock at the base of that tree where Andy has left something for Red. The tree is a symbol for Andy- it is the place that pictures a world almost forgotten, a place where tragedy and horror had not yet invaded into Andy’s life. Red, who has all but lost hope of living in a world beyond his prison routine and settled into the static systems of life behind bars, promises Andy that he will. Soon afterwards, Red is released and finds the rock. There under the rock, just as Andy had promised, is an old tin box. And in that old tin box is a large sum of money and a note from Andy encouraging Red to meet him in Mexico. “I will keep an eye out for you and the chess board ready”, Andy writes, “…Remember Red, hope is a good thing, maybe the best of things.   And no good thing ever dies.”

Red sees hope within reach and grabs it. He boards a bus, breaking parole and heads off to reunite with his friend. And as the film draws to an end, we see Red taking the bus to Fort Hancock, Texas and we hear his voice gently narrating this little moment of wonder-

“I hope I can make it across the border. I hope to see my friend and shake his hand. I hope the Pacific is as blue as it has been in my dreams. I hope.”

The film ends with Red and Andy reuniting on the beach in an embrace of friendship and peace for which they could only have dreamed. There I sat, some two plus hours after having tucked in Micah, having heard him break the routine to whisper, “I love you, daddy”. I could see his face in my mind, looking right into my eyes and beaming from ear-to-ear with a smile as beautiful and brilliant as a field of wildflowers in full bloom. “I love you, daddy.” I had done this bed time routine so often, this moment of hope had almost slipped right past me. It fled so quickly, it was like grasping at smoke, except I had stored it in my mind. And then, I watched The Shawshank Redemption. In fact, what I had watched was yet another movie that told the story that was burned onto my hard drive- a story of a hero and a force of evil attempting to enslave; a story of redemption and restoration and the whispers of hope.

Ever wonder if the often-quoted statistics about divorce rates in families impacted by disability are true? Check out Key Ministry’s resource: Special Needs and Divorce…What Does the Data Say? In this article, Dr. Steve Grcevich reviews the available research literature on the topic of disability and divorce…and draws some surprising conclusions! Check it out…and share with your friends!

Dr. Stephen Grcevich serves as President and Founder of Key Ministry, a non-profit organization providing free training, consultation, resources and support to help churches serve families of children with disabilities. Dr. Grcevich is a graduate of Northeastern Ohio Medical University (NEOMED), trained in General Psychiatry at the Cleveland Clinic Foundation and in Child and Adolescent Psychiatry at University Hospitals of Cleveland/Case Western Reserve University. He is a faculty member in Child and Adolescent Psychiatry at two medical schools, leads a group practice in suburban Cleveland (Family Center by the Falls), and continues to be involved in research evaluating the safety and effectiveness of medications prescribed to children for ADHD, anxiety and depression. He is a past recipient of the Exemplary Psychiatrist Award from the National Alliance on Mental Illness (NAMI). Dr. Grcevich was recently recognized by Sharecare as one of the top ten online influencers in children’s mental health. His blog for Key Ministry, www.church4everychild.org was ranked fourth among the top 100 children's ministry blogs in 2015 by Ministry to Children.
View all posts by Dr. G →
This entry was posted in Autism, Spiritual Development and tagged Autism, Dave Lynden, hope, Key Ministry, Spiritual Autism, spiritual development, The Shawshank Redemption. Bookmark the permalink.