Why we can’t acknowledge the presence of evil

The shooting that took place yesterday at Umpqua Community College. The TV reporter and her cameraman who were shot last month in Virginia in the middle of an interview they were doing for the morning news. The school shootings we experienced here in our local community several years ago. The six month old girl who was shot through the chest and killed here in Cleveland last night while riding down the street in a car with her family… in the same month as a five year old and three year old in the city were killed in drive-by shootings. What do they have in common?

Evil is the cause of incidents like this one…evil and profound spiritual poverty. Not guns. Not the absence of mental health services. Evil.

We have one group of people arguing that access to guns is the cause of events such as yesterday’s massacre. If we only had more laws controlling access to guns, events like yesterday wouldn’t occur. I’d argue that someone who doesn’t care about the laws on the books about murder isn’t going to care about laws on possessing or obtaining guns. 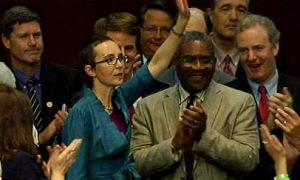 Another group of people argues that our problems with violence result from a lack of mental health services. Media reports about yesterday’s perpetrator include descriptions of him having been quiet, withdrawn, socially awkward and quoting witnesses who report his mother believed he had mental health issues. It’s true that in many of these shootings, the perpetrators had significant issues with social interaction and communication. In the cases of the Colorado theater shooter and the Arizona gunman who shot congresswoman Gabby Giffords, the perpetrators appeared to be experiencing psychotic illness. But we have MILLIONS of people with social anxiety, high-functioning autism and serious mental illness who don’t go out and randomly kill strangers.

I’d also add that as a psychiatrist, mental health treatment has little to offer someone who purposefully and intentionally plans to kill others. We have treatments that can help when people lose touch with reality or have diminished capacity for self-control as a result of mood disorders or problems with executive functioning. When someone has the ability to execute a plan in which they acquire four guns (and the ammunition for the guns), identify a school to target, drive to that school, walk to a classroom, take the time to ask people (by some reports) whether they’re Christians and chooses to shoot them in the head if they answer yes, we have NO PILL and NO TREATMENT to stop them from doing so.

We live in a bad world with a lot of really bad people.

Too many of us don’t want to admit it because to do so, we’d have to acknowledge that there are absolute standards of right and wrong established by God and that’s not acceptable in a world in which everyone thinks they can decide that for themselves. We very much want to be in control…be the masters of our own universe.

The search for a solution through gun control or mental health intervention represents a desperate attempt to temporarily relieve our fears while maintaining our sense that we can keep everything under control without having to submit to a reality larger than our own wants and desires.

We don’t have a gun problem. We have a SIN problem. And all the laws in the world won’t fix it. Go read the first 70% of your Bible. God handed down Ten Commandments to the people of Israel, and the people sought to keep hundreds of laws governing religious practice and everyday life. How’d that work out?

Why was yesterday’s shooting wrong? Doesn’t everybody have the “autonomy” or “dignity” to decide right and wrong for themselves? Obviously, the perpetrator didn’t think it was wrong. Who are we to judge?

Romans 1:18-32 is one of the most tragic passages in the Bible I can imagine. It describes the outcome when we choose to turn away from God. It’s also an extraordinarily accurate description of our dominant culture…

For the wrath of God is revealed from heaven against all ungodliness and unrighteousness of men, who by their unrighteousness suppress the truth. For what can be known about God is plain to them, because God has shown it to them. For his invisible attributes, namely, his eternal power and divine nature, have been clearly perceived, ever since the creation of the world, in the things that have been made. So they are without excuse. For although they knew God, they did not honor him as God or give thanks to him, but they became futile in their thinking, and their foolish hearts were darkened. Claiming to be wise, they became fools, and exchanged the glory of the immortal God for images resembling mortal man and birds and animals and creeping things.

Therefore God gave them up in the lusts of their hearts to impurity, to the dishonoring of their bodies among themselves, because they exchanged the truth about God for a lie and worshiped and served the creature rather than the Creator, who is blessed forever! Amen.

For this reason God gave them up to dishonorable passions. For their women exchanged natural relations for those that are contrary to nature; and the men likewise gave up natural relations with women and were consumed with passion for one another, men committing shameless acts with men and receiving in themselves the due penalty for their error.

And since they did not see fit to acknowledge God, God gave them up to a debased mind to do what ought not to be done.  They were filled with all manner of unrighteousness, evil, covetousness, malice. They are full of envy, murder, strife, deceit, maliciousness. They are gossips, slanderers, haters of God, insolent, haughty, boastful, inventors of evil, disobedient to parents, foolish, faithless, heartless, ruthless. Though they know God’s righteous decree that those who practice such things deserve to die, they not only do them but give approval to those who practice them.

We can’t acknowledge the true reason behind the mass shootings that have become increasingly commonplace in our country because if we do so, we activate the consciences of the politicians, financiers, academics, thought leaders and media people who shape the culture and their followers who have rejected God and His truth as revealed through the life and person of Jesus. We’ve seen how angry they can become when the fallacies of their ways come to light and how determined they are to protect their supporters from “microaggressions” that might challenge their to rethink their worldview or lifestyle.

I would hope that God would give me the courage to speak the truth if I’m ever in a situation similar to those in Oregon who were asked if they were Christians after seeing others shot in the head for answering affirmatively. But if we can’t acknowledge Jesus and seek to live in submission to his truth in our daily lives, we’re living a lie of our own creation and denying our families and loved ones a witness to the only truth that really matters.

Dr. Stephen Grcevich serves as President and Founder of Key Ministry, a non-profit organization providing free training, consultation, resources and support to help churches serve families of children with disabilities. Dr. Grcevich is a graduate of Northeastern Ohio Medical University (NEOMED), trained in General Psychiatry at the Cleveland Clinic Foundation and in Child and Adolescent Psychiatry at University Hospitals of Cleveland/Case Western Reserve University. He is a faculty member in Child and Adolescent Psychiatry at two medical schools, leads a group practice in suburban Cleveland (Family Center by the Falls), and continues to be involved in research evaluating the safety and effectiveness of medications prescribed to children for ADHD, anxiety and depression. He is a past recipient of the Exemplary Psychiatrist Award from the National Alliance on Mental Illness (NAMI). Dr. Grcevich was recently recognized by Sharecare as one of the top ten online influencers in children’s mental health. His blog for Key Ministry, www.church4everychild.org was ranked fourth among the top 100 children's ministry blogs in 2015 by Ministry to Children.
View all posts by Dr. G →
This entry was posted in Controversies and tagged Chris Harper Mercer, evil, gun control, Mass Murder, mental health, mental illness, school shootings, sin, spiritual poverty, Umpqua Community College, violence. Bookmark the permalink.