Mental Illness and Mass Murder: Reflections From a Christian…and a Psychiatrist 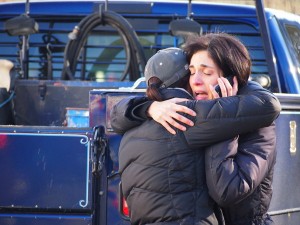 As Christians, we recognize the reality that we live in a broken world. When sin entered into the world and our relationship with God was broken, one consequence that we all continue to experience to this day are bodies that are, to one degree or another, broken. Given enough time, the organ systems that comprise our bodies break down to the point that we die. Our brain is arguably our most vulnerable organ and the organ most susceptible to the toxic effects of the world in which we live.

This is far from an inclusive list, but traits associated with human brains may predispose a person to violent or aggressive behavior, or perpetuate patterns of violent behavior. Some of those traits include…

The most common pattern I see in the shootings that have rocked our country in the past few years is the extent to which the perpetrators in each of these shootings experienced significant social isolation.

From a Christian standpoint, this social isolation points to another quality of our broken world. To quote Rick Warren, we were created for relationship. We were created for an eternal relationship with God…our loving Father. We were created to be in relationship with one another. I’d argue that in the Parable of the Lost Sheep, the shepherd’s (Jesus’) pursuit of the lost sheep wasn’t simply because the sheep needed its shepherd, but because the lost sheep needed to be part of the community made up of the 99 other sheep, and the herd needed their lost brother or sister.

One very common observation among the kids I see in my practice is that kids who have a propensity to get stuck on distressing thoughts or gratifying an immediate need don’t do well with social isolation. I see kids like this all the time who do fine when they’re in school because of the cognitive stimulation associated with learning and the need to interact with teachers and peers, but become irritable and violent at home when there’s less stimulation to distract them from their obsessive or ruminative thinking. I suspect the same is true of the adults who have concocted elaborate plots to kill.

The events of the past week, having occurred in an outer suburb of the nation’s media capital, will lead to calls for increasing access to mental health services or limiting access to firearms. Neither intervention will result in a safer society for our children and families. An inconvenient truth about America’s mental health services is that we don’t have nearly enough qualified mental health professionals, and too many of the professionals and agencies we have aren’t very effective at helping the kids, adults and families who come desperately seeking help. We don’t have the money to provide everyone with potential for violence the intensity of service or supervision necessary to eliminate the risk to society, and even if we did, such an effort would involve an unacceptable intrusion into civil liberties. As for firearms, laws against murder didn’t serve as a deterrent in any of the recent mass killings, and bright, determined individuals intent upon mass murder find other methods to kill. Consider the Oklahoma City bombing, or 9/11. The Aurora, CO theater shooter had rigged explosives and gasoline to kill police coming to search his apartment. On the same day as the Newtown massacre, a man in China (where they have knife control laws in place) stabbed 22 children at an elementary school, three critically.

Efforts to address the danger present in our society through gun control or better mental health services represent futile attempts to employ collective defense mechanisms to assuage our anxieties and enable our avoidance of the real issue…there is evil in the world, NONE of us is good, and we as individuals and collectively as a society are powerless to do anything about it. Ask the parent of any two year old…Nobody teaches their kid to punch or kick or bite when another kid takes their toy away. We’re wired that way. It’s our human nature. We as Christians describe it as our sinful nature. But we don’t want to face that reality, or the reality that there are absolute standards of right and wrong established by the Creator of the world and when those standards are violated, pain and heartbreak are inevitable consequences.

We need to appreciate our place in a larger story. We live in a fallen world. A week from Tuesday, we’re commemorating the birth of our Savior, Jesus Christ, who came to deal with the problem that our sinful human nature represents in separating us from a pure and holy God. We as Christians believe that through His birth, death and resurrection, Jesus allows us to be reconciled to God. When He was born in a Bethlehem manger 2000 years ago, Jesus began the process of re-establishing His Kingdom here on Earth and restoring the world to how it was created to be. During this era in human history, those who have professed faith in Jesus, through the working of the Holy Spirit, continue the process of re-establishing the Kingdom until the day when Jesus returns to complete the process. We’re players in the ultimate battle in the universe…the battle between good and evil. This battle is WAY bigger than any of us. Recently, it’s felt like we’re losing a lot more than we’re winning. So, what are we to do?

Jesus gave us our marching orders…”Go therefore, and make disciples of all nations.” We’ll never finish the job-it’s up to Jesus to do that. But the root cause of the massacre in Newtown…as well as the massacres in Chardon, Aurora, Virginia Tech and Columbine is a fundamental problem of the evil in the human heart. You’ve never seen anyone who truly displayed the fruits of the Spirit shoot up a school or crash planes into buildings.

Those of us who are Christ-followers…and WAY too many of our religious professionals have abdicated their responsibility to be salt and light in the world. You want to reduce the senseless violence in the world? Get intentional about allowing Jesus to use you to make more Christians!

One last thought to our readers…and this will be the topic of my next post…Families who have kids or grown children who demonstrate some or all of the traits described above that predispose them to violent/aggressive behavior are in special need of the love of Christ, and represent a great place to start if we’re going to change the world. Nobody should feel like an outsider in the church. And yet, we’re not very good at creating environments that are welcoming to those with mental conditions that leave them isolated and friendless…and vulnerable to the effects of the evil in the world.

Photos from the Newtown Patch.

Looking for a unique Christmas gift for the person who has everything…including a relationship with Jesus? Consider something from the Key Catalog! You can sponsor anything from an on-site consultation at a local church, the addition of a new site for church-based respite care to a “JAM Session” to help multiple churches launch special needs ministries in your metropolitan area. Click the icon on the right to explore the Key Catalog!

Dr. Stephen Grcevich serves as President and Founder of Key Ministry, a non-profit organization providing free training, consultation, resources and support to help churches serve families of children with disabilities. Dr. Grcevich is a graduate of Northeastern Ohio Medical University (NEOMED), trained in General Psychiatry at the Cleveland Clinic Foundation and in Child and Adolescent Psychiatry at University Hospitals of Cleveland/Case Western Reserve University. He is a faculty member in Child and Adolescent Psychiatry at two medical schools, leads a group practice in suburban Cleveland (Family Center by the Falls), and continues to be involved in research evaluating the safety and effectiveness of medications prescribed to children for ADHD, anxiety and depression. He is a past recipient of the Exemplary Psychiatrist Award from the National Alliance on Mental Illness (NAMI). Dr. Grcevich was recently recognized by Sharecare as one of the top ten online influencers in children’s mental health. His blog for Key Ministry, www.church4everychild.org was ranked fourth among the top 100 children's ministry blogs in 2015 by Ministry to Children.
View all posts by Dr. G →
This entry was posted in Controversies, Hidden Disabilities, Key Ministry and tagged aggression, Christian, church, evil, Mass Murder, massacre, mental illness, Newtown, Psychiatrist, social isolation, violence. Bookmark the permalink.

5 Responses to Mental Illness and Mass Murder: Reflections From a Christian…and a Psychiatrist