In our third installment of our series, Sin, Mental Illness and the Church, we look at a significant unintended consequence of the Biblical Counseling movement, and introduce you to several church leaders seeking to influence the way in which the church understands the struggles of those with identified mental health conditions.

Ten or so years ago while attending a scientific meeting, I was hanging out at a reception with a colleague I’d worked with on some medical education projects who was deeply involved with increasingly controversial research involving pediatric bipolar disorder. The research being done at their institution was receiving increasing degrees of scrutiny by some in the media as the prevalence of kids being treated for bipolar disorder exploded.

By the time I was considered a “thought leader” in select therapeutic areas within my specialty, I came to understand that along with the privilege came great responsibility. I had (and have) great respect for this investigator and the integrity of the research done at the institution where they serve. But it appeared to many that clinicians in the trenches were misinterpreting the research and exposing kids to unnecessary and potentially dangerous treatments because they weren’t taking into account all of the guidance derived from the research, and my colleague and I politely disagreed about whether he and his associates had a responsibility to intervene.

Last week, we looked at some of the teaching of Jay Adams, the founder of the Biblical Counseling movement in the late ’60s and early 70s. Adams held (and some might argue, continues to hold) very negative views about psychiatry and psychology. Adams also wrote about the importance of grace in the counseling process. But in the same way that some clinicians went overboard in diagnosing every kid with protracted temper tantrums as “bipolar”, lots of biblical counselors went overboard on the “sin” and “truth” components of Adams’ model and forgot about the “grace.”

Let’s talk about why this is a big issue. Here are some findings from a research study published seven years ago by Dr. Matthew Stanford from Baylor University titled Demon or Disorder: Attitudes About Mental Illness and the Church…

▪ 30% of attendees seeking help from their church for themselves or a family member because of a mental health condition reported negative interactions counterproductive to treatment.

▪ Women are significantly more likely than men to report being told by their church that they don’t have a mental health disorder (37%), discouragement from their church about the use of medication for mental disorders (23%), and report negative interactions with their church (41%).

▪ 15% of adults who sought help from their church for a mental illness for themselves or a family member reported a weakening of faith as a result of their interaction, and for 13%, their interaction resulted in the end of their involvement with their faith.

Lifeway Research was involved with Focus on the Family in a large research project entitled the Study of Acute Mental Illness and Christian Faith, the results of which were made public last Fall. 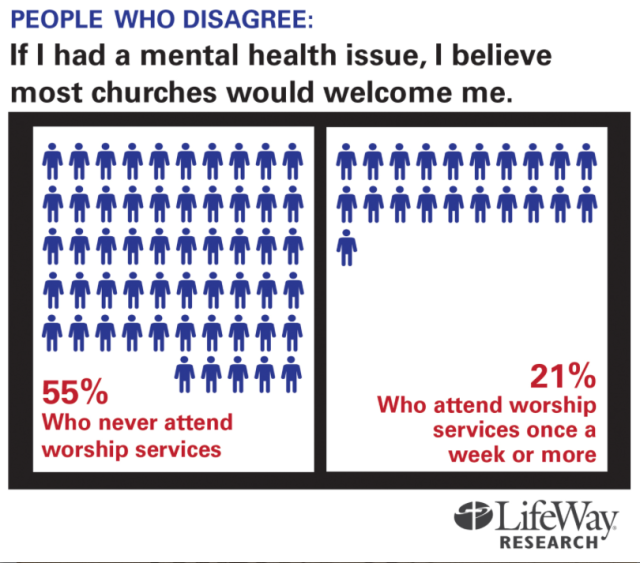 Some findings in the Lifeway study appeared to confirm results described in the Baylor study.

The research appears to suggest that we have a lot of people within the church who struggle with emotional distress who have been badly hurt by their interactions with pastors, church staff, counselors and the reactions of fellow believers. Clearly, there’s an established perception among the majority outside the church that those struggling with more serious or chronic mental health concerns won’t be welcome at church…and that’s a very big problem when it comes to fulfilling Christ’s command to make disciples.

Twenty years ago, I was repeatedly told by many people that I just needed to pray harder and that if my relationship with Jesus was better, my severe depression would be healed. I bought into that for a while and did everything humanly possible to pray, study the Bible go to church and so on. But my depression was not healed. I left the church for several years, but returned hoping that not all Christians thought that way. Of course, I also didn’t tell too many church friends about my mental illness.

Fast forward to the present. I now have 2 children with severe mental illness. Last year, my daughter was forced to join a Sunday School class in which she knew no other child. I tried in vain to explain that she had severe social anxiety and needed to be in a class where she had a friend. Because of that, she wasn’t happy in Sunday School and ended up quitting the children’s choir too. We hardly ever go to church any more. I write this with tears in my eyes because I want to find a church where my kids and I are accepted, and yes, even given “special” treatment from time to time…

I guess I got off topic of your blog post, but the idea of mental illness or any illness being caused by sin is still very prevalent in out churches, as is the idea that we should be able to pray it away.

There are other prominent voices within the evangelical/reformed movements with harsh things to say about our conceptualization of mental illness. John MacArthur did an entire blog series this past September on the topic. Here are links to the first and second part of a two part post that echoes the themes espoused by the Nouthetic Counseling Institute.

It is reasonable for people to seek medical help for a broken leg, dysfunctional kidney, tooth cavity, or other physical malady. It is also sensible for someone who is alcoholic, drug addicted, learning disabled, traumatized by rape, incest, or severe battering to seek some help in trying to cope with their trauma.

There may also be certain types of emotional or mental problems where root causes are identifiably organic, or where medication might be needed to stabilize an otherwise dangerous person. These are relatively rare problems, however, and should not be used as justification for the indiscriminate use of secular psychological techniques for what are usually spiritual problems. Dealing with the physical and emotional issues of life in such ways is not sanctification!

Certain techniques of human psychology can serve to lessen trauma or dependency and modify behavior in Christians or non-Christians equally. But since the secular discipline of psychology is based on godless assumptions and evolutionary foundations, it is capable of helping people only superficially with no contribution toward their spiritual growth.

It appears that a not insignificant number of people who seek help from their churches for mental health-related concerns have experiences so negative that their spiritual life is impacted and some ultimately leave the church. Clearly not the intended consequence of a movement grounded in the idea that the Bible is sufficient in providing answers to the struggles experienced by those wrestling with mental illness.

There are ways in which the church can reach out to and include families impacted by mental illness without compromising the truth contained in God’s Word. There are groups within the church wrestling with these issues. Here’s a link to a very thoughtful discussion of the issues involved from the Biblical Counseling Coalition. Ed Welch has a very helpful article in the current issue of CCEF Now (pages 9-11 in the .pdf) on ways that persons in the church can help others with psychiatric disorders. Brad Hambrick has proposed A Christian Perspective on Mental Illness.

Next, we’ll look at how kids with identified mental health conditions have been stigmatized in the church.

Dr. Stephen Grcevich serves as President and Founder of Key Ministry, a non-profit organization providing free training, consultation, resources and support to help churches serve families of children with disabilities. Dr. Grcevich is a graduate of Northeastern Ohio Medical University (NEOMED), trained in General Psychiatry at the Cleveland Clinic Foundation and in Child and Adolescent Psychiatry at University Hospitals of Cleveland/Case Western Reserve University. He is a faculty member in Child and Adolescent Psychiatry at two medical schools, leads a group practice in suburban Cleveland (Family Center by the Falls), and continues to be involved in research evaluating the safety and effectiveness of medications prescribed to children for ADHD, anxiety and depression. He is a past recipient of the Exemplary Psychiatrist Award from the National Alliance on Mental Illness (NAMI). Dr. Grcevich was recently recognized by Sharecare as one of the top ten online influencers in children’s mental health. His blog for Key Ministry, www.church4everychild.org was ranked fourth among the top 100 children's ministry blogs in 2015 by Ministry to Children.
View all posts by Dr. G →
This entry was posted in Advocacy, Controversies, Families, Hidden Disabilities, Inclusion, Key Ministry, Mental Health and tagged Biblical Counseling, Biblical Counseling Coalition, Brad Hambrick, church, Disability Ministry, Dr. Matthew Stanford, Ed Welch, Inclusion, Jay Adams, Key Ministry, mental illness, Nouthetic Counseling, sin, unintended consequences. Bookmark the permalink.

3 Responses to Unintended consequences…Sin, mental illness and the church